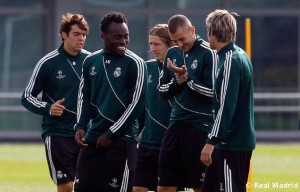 Real Madrid midfielder Michael Essien is set to play on Wednesday when they face Ajax in the Champions League after recovering from injury.

The Ghana enforcer has travelled with his side to Amsterdam where they play the Dutch giants in Group D.

Essien could not play for the Spanish giants when they played Deportivo in La Liga on Sunday because of the minor injury setback.

The Ghanian star will be available for the Champions League game as the injury was not serious.

Real Madrid agreed to sign the 29-year-old Ghana midfielder on loan from Chelsea for the rest of the season on transfer deadline day.

The 29-year-old, who won two Premier League titles, four FA Cups and one Champions League at Chelsea, joined Real Madrid on loan until the end of the ongoing season.