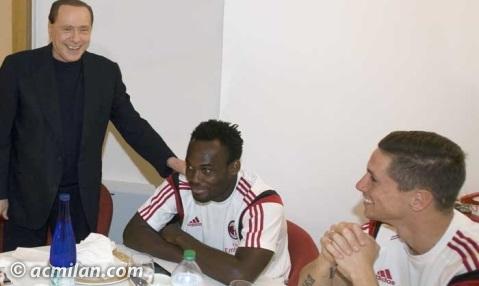 Torres moved to Milan from Chelsea in the summer transfer to join former Chelsea team-mate Michael Essien who also signed for the Rossoneris last season from the West London giants.

The pair played together at the Stamford Bridge for two seasons before falling down the pecking order and heading to the Serie A outfit in a season sequence.

On Friday, as the two players begin to share their former club experience and re-establish their friendship from Chelsea, club President and former Italian Prime Minister Silvio Berlusconi joined them at the club's Milanello and shared talks with them.

The pair were among Milan players who were not called for national duty during the international breaks and Essien was left out of Kwesi Appiah's Ghana squad while Torres was also axed by Spain coach Vicente Del Bosque.