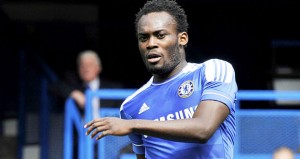 Chelsea manager Andre Villas-Boas says midfielder Michael Essien is still at least a month away from returning to action after suffering a fresh setback on his knee.

Essien has not featured this season due to a cruciate knee ligament injury and was expected to return to action by the end of this month.

Villas-Boas has revealed that the Ghanaian suffered a "setback" in his rehabilitation at the start of December.

He is not expected to be fit until the middle of January, a timescale that likely rules him out of the African Cup of Nations.

"We're looking at mid-January, that's the best we can think about," said Villas-Boas.

"There was a setback at the beginning of December if I'm not wrong which took him back 10 days and that's extended into January, so I don't think he will go to the African Cup of Nations."