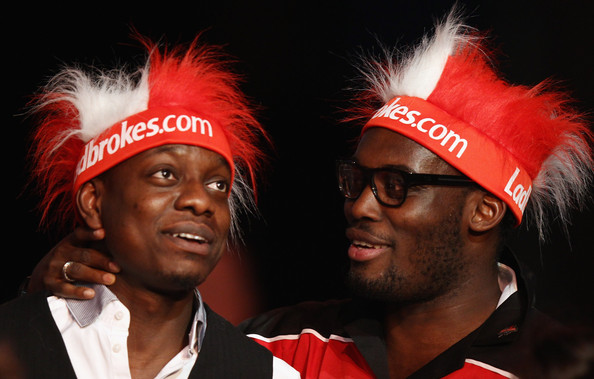 Chelsea footballer Michael Essien is the star attraction at the World Darts Championships at Alexandra Palace in England.

Michael enjoyed the match-up from the stands seated in a sharp charcoal suit, which featured a blazer with black lapels; he layered over a vest and button-up combination. Michael complimented his attire with a touch of preppy in a pair of fashionable frames.

Sweet fit, the blazer is my favorite piece, I would wear it formally with slacks or slip on some hard denims.

Out for the Premier League season so far â€“ the Chelsea enforcer ruptured his anterior cruciate ligament and meniscus during pre-season training â€“ Essien would not be first player to stagger into the darts arena. Many footballers use downtime to go on Twitter and share their thoughts on washing up and breakfast as a way of getting into the media on their own terms. Better, perhaps, they retrain for the days after the match, when the flesh widens but the competitive streak remains. Darts is the future. Darts may be a good walk spoilt, as the critics say, but itâ€™s a sport at its most pure.