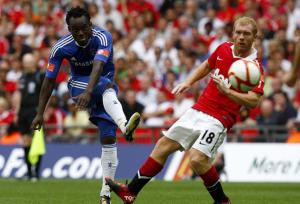 Ghana midfielder Michael Essien has temporarily put his international career on hold saying he will not play for the Black Stars for some time.

This comes after coach Milovan Rajevac said he will welcome the fit-again Chelsea enforcer for next month's African Cup of Nations qualifier against Swaziland.

But the midfielder feels after so many recent injury setbacks he wants to concentrate on getting back to his best with Chelsea as knee injuries have recently threatened his career.

Essien said: â€œI think I will be taking a break. Not retiring, just not playing for time. I have to take the right decision for myself.

â€œI donâ€™t know whether they will be disappointed because they have done fine without me.â€

The midfielder is also aware that his absence will not be severe on his country as players like Anthony Annan, Kevin Prince Boateng and Emmanuel Agyemang Badu have excelled in the Chelsea star's absence.

Essien missed the World Cup in South Africa in June because of a serious knee injury but his absence the Black Stars reached the last eight of the tournament.

He suffered the injury while training at the African Cup of Nations in Angola in January and only recently returned to action for Chelsea.

The English side have also recently brought in players who are capable of competing with Essien for his starting place in the English side's squad.

His absence in the Black Stars squad means other young players with hopes of playing the national team could be given the chance to impress.