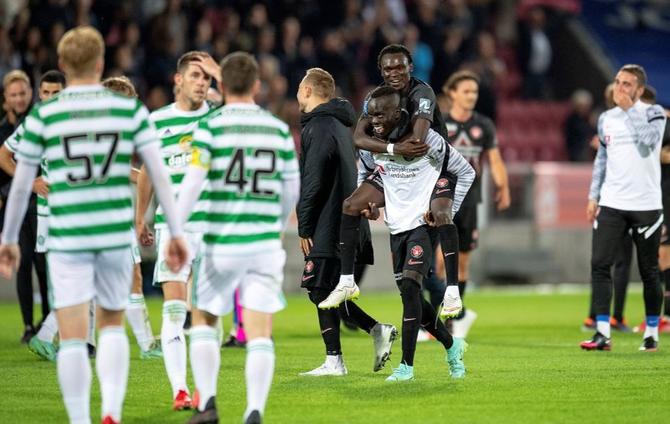 Celtic suffered another Champions League nightmare as Midtjylland came from behind to reach the third qualifying round with a 2-1 victory after extra time.

A magnificent Callum McGregor goal put the Hoops in front on aggregate early in the second half of a second leg that started with the two sides level at 1-1 at the MCH Arena.

Awer Mabil equalised with a header and Raphael Onyedika settled the tie early in extra time as the Danish Superliga side set up a two-legged meeting with PSV.

Celtic crashed out at the same stage as they did last season at the hands of Ferencvaros and will now face a Europa League qualifier against Czech side Jablonec in a miserable start to Ange Postecoglou's reign.

David Turnbull forced an early save from Midtjylland goalkeeper Jonas but it was not until the second half that the game burst into life.

McGregor opened the scoring in spectacular fashion just three minutes after the break, controlling the ball on his chest after it was headed into his path from a corner and unleashing a sublime left-foot volley that flashed into the far corner of the net from outside the penalty area.

Midtjylland responded well to going behind and Onyedika called Scott Bain into action with a shot from a tight angle before Mabil nipped in to nod home Pione Sisto's pinpoint cross just after the hour mark.

Victor Stange Lind wasted a great chance to snatch victory at the end of normal time when he fired a volley wide, but Onyedika deservedly fired home the winner with his left foot when Celtic failed to deal with a free-kick four minutes into extra time.