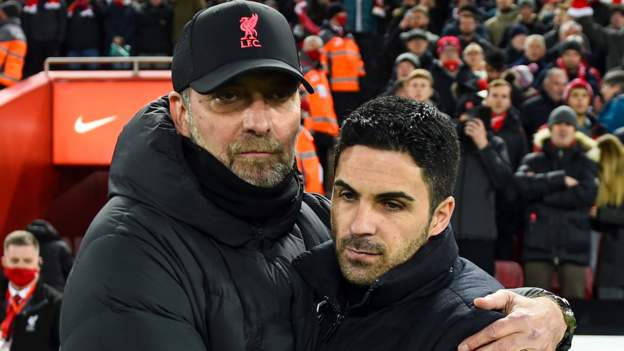 Manager Mikel Arteta says the turnaround at a "fractured" Arsenal "is a credit to everyone".

Arteta came under pressure after a poor start to last season and his side went on to narrowly miss out on a Champions League place to Tottenham.

But they go into Sunday's game against Liverpool top of the Premier League after seven wins from eight games.

"I'm really happy and proud for the change of dynamic and the atmosphere around the club," said Arteta.

"Looking ahead again at where we want to be - we are not there yet.

"How you measure success is lifting trophies, but as well you have to understand where we were and how fractured the club and the environment looked. How it looks now is a credit to everyone."

Arteta has been in charge at Emirates Stadium since December 2019 and signed a new contract running until 2025 in May.

His side have not beaten Liverpool since July 2020 and host the Reds with an 11-point lead over Jurgen Klopp's team, who are ninth in the Premier League.

"It is a really exciting game against one of the top opponents in this league," said Arteta. "It will be a really demanding match that is going to require us to be at our best.

"It is a fixture that everybody is looking for against an opponent that has shown the level they have in the last five and six years.

"We have to show we have raised our level and are able to compete."