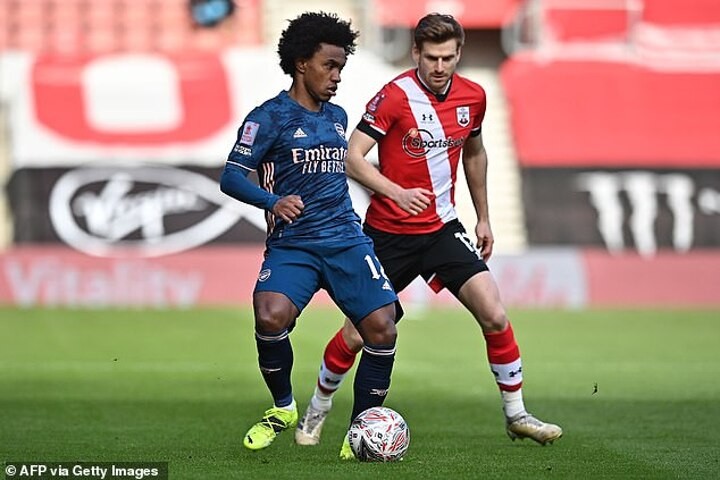 Mikel Arteta has said he will keep working hard with Nicolas Pepe and Willian to try and turn around their fortunes after the pair were once again ineffectual as FA Cup holders Arsenal crashed out of the competition at Southampton.

The pair were part of eight changes from the side that had comfortably seen off Newcastle in the league on Monday, but neither player was able to resurrect their flagging reputations as Gabriel's 24th-minute own goal was enough to separate the teams.

Pepe arrived at the Emirates from Lille for a mammoth £72million in the summer of 2019, but he has largely flattered to deceive after arriving to much fanfare, with seven goals and six assists in 43 Premier League games so far.

Willian's arrival across town from Chelsea was also viewed as a shrewd bit of business, but the Brazilian has not injected the level of energy that Gooners had witnessed when he was plying his trade in west London.

Peter Crouch said the pair did not warrant a place in the starting XI, but speaking after his side were eliminated, Arteta defended the beleaguered duo.

'They try to give their best,' the Arsenal boss said. 'The intention and willingness is there and after the decision making, the final pass is the end product and that's the hardest thing in football. We're going to keep supporting them as much as we can.'

On whether they can turn around their fortunes, he said: 'I hope so, and we're going to keep supporting them as much as we can as a coaching staff and as a club, because that's what they need. They need to keep working harder and try to improve their performances.'

It was Willian's dawdling on the ball that led to the decisive moment in the contest. Southampton won possession and switched the play, with former Tottenham right back Kyle Walker-Peters delivering a venomous cross which Gabriel diverted beyond the desperate dive of Bernd Leno.

The Gunners now turn their attention back to the league, coincidentally against Southampton at St Mary's on Tuesday.