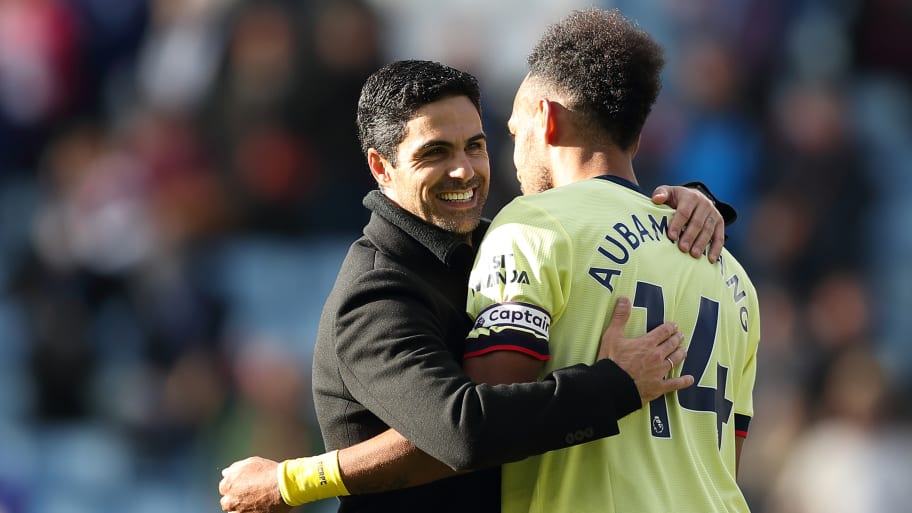 Mikel Arteta has insisted that he's not fallen out with Arsenal captain Pierre-Emerick Aubameyang, amid rumours of friction between the pair.

Aubameyang was substituted by Arteta on Thursday with Arsenal needing to find a goal against Manchester United, which prompted club legend Thierry Henry and Alan Shearer - who were pundits covering the game on Amazon Prime - to suggest that the duo must not be seeing eye to eye.

But Arteta, speaking ahead of the Gunners' trip to Everton in the Monday Night Football, was adamant there is no problem with his skipper, and claimed that any decision he makes in a game is solely focused on benefitting the team.

"I can guarantee you that there is not a rift," Arteta said. "You have to respect their opinion (Henry and Shearer’s) but what I can tell you is I have the relationship I want with him.

"When I make decisions with 15, 20, 30 minutes left, or in the line-up at the start, it is done with one intention and that is to get the best out of the team."

On whether or not Aubameyang had felt humiliated at being substituted with Arsenal trailing 3-2, Arteta replied: "That is the last word I would use with my players because if that’s humiliation, imagine what it’s like for the ones left out of the team."

Aubameyang signed a new three-year deal at Arsenal in September 2020, ending rumours at the time that he was looking to engineer a move away from the Emirates Stadium.

But the 32-year-old's goalscoring touch has deserted him when compared to his first two-and-a-half years at the club, and Aubayemang has just four Premier League goals to his name during 2021/22 in 13 appearances.

"Obviously he’s been contributing to games in different ways. Unfortunately he has not scored as many as you would expect in terms of goals," the Spaniard added. "You always are concerned when your main striker is not scoring goals but he’s trying his hardest and he’s aware of how much we need him in the team to score the goals.

"At the moment they are not coming but the rest of the things that we ask him to do [are]. He’s trying to do his best."

This article was originally published on 90min as Mikel Arteta denies rift with Pierre-Emerick Aubameyang.