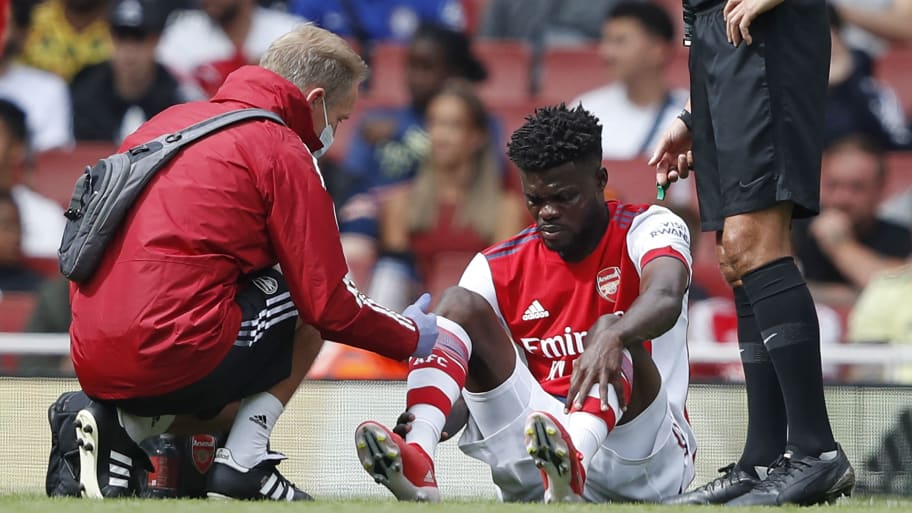 Arsenal manager Mikel Arteta has suggested midfielder Thomas Partey could be set for a lengthy spell on the sidelines after picking up an injury in a pre-season friendly against Chelsea on Sunday afternoon.

Partey was caught by a heavy challenge from Ruben Loftus-Cheek and was forced off five minutes before half-time, with the Gunners going on to lose the game 2-1.

Images of the tackle appear to show the 28-year-old's foot caught beneath the weight of Loftus-Cheek's thigh and his ankle turned in an unnatural position.

Speaking after the game, Arteta admitted the injury was 'not looking good', suggesting the Ghanaian will almost certainly miss Arsenal's opening game of the season against Brentford on 13 August.

"I just had a talk with the doc and he's going to have a scan tomorrow," Arteta said. "At the moment it's not looking good because he was in pain.

"He could not continue, which for Thomas is pretty unusual."

Partey was replaced by Granit Xhaka, who Arteta added would be staying at the Emirates following speculation linking the Swiss with a £15m move to Roma.

Xhaka would go on to equalise for Arsenal with a header from a corner in the second period after Kai Havertz's fine opener for Chelsea in the first half. However, a horrible defensive mixup involving Hector Bellerin gifted the ball to Tammy Abraham to coolly slot home the winner in the 72nd minute.

Arsenal will be desperately hoping the injury is nothing too serious, with Partey a key part of Mikel Arteta's new-look side as they head into 2021/22 looking for a swift return to European football having missed out for the first time in 25 years last term.

The Gunners have already spent a combined £75m on Nuno Tavares, Albert Sambi Lokonga and Ben White, and further additions are expected with a £250m war chest at their disposal this summer.