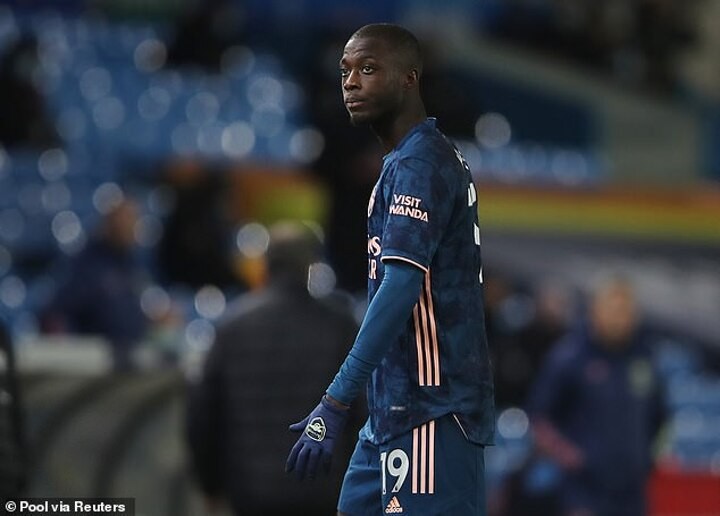 Pepe saw red for a second-half, off-the-ball moment of madness when he responded to provocation from the Leeds midfielder.

‘You need to be able to deal with that because it’s part of the plan against this team.’

There is a feeling among some of Arsenal’s players that, if given a regular chance, Pepe has what it takes to make a real impact.

The one he made on Alioski’s head on a day when he was handed a big opportunity was not quite what they would have had in mind.

Making just his second Premier League start of the season, Pepe’s afternoon ended prematurely after he allowed Alioski to get under his skin.

There had been an initial off the ball flashpoint between Alioski and Pepe minutes earlier as the Arsenal winger tried to wriggle free and keep possession in his own half.

Then they clashed again outside the Leeds box while play went on around them, Pepe leaning his head in towards Alioski’s and what followed was inevitable.

The speed of referee Anthony Taylor’s pitch side monitor check – two replays needed at most – underlining that Pepe’s subsequent red card was a formality.

It could have been a costly moment for Mikel Arteta’s side who were forced to play the final 40-plus minutes with just 10 men.

But to their credit they dug in, but also rode their luck a little, as they ground out a goalless draw.

Instead it is Pepe himself who might have the biggest price to pay. This was a major missed opportunity for Arsenal’s £72m club record signing to stake a claim.

Arteta is searching for a solution to Arsenal’s attacking struggles.

In an attempt to find one he turned to Pepe, along with restoring captain Pierre-Emerick Aubameyang to a central role.

What he then saw from Pepe was in keeping with his inconsistent and largely-underwhelming Arsenal career since his much-heralded arrival last summer, flashes of hope but also moments of frustration.

Pepe caused panic with a mis-hit cross that grazed the bar and then had Illan Meslier scrambling with a second effort later in the first half. Then he was needlessly sent off.

That left him forced to watch on as Bukayo Saka emerged as Arsenal’s most eye-catching attacker, before he limped off injured, while half-time sub Reiss Nelson was also given 45 minutes to give Arteta some food for thought.

Pepe’s main contribution to the game, in Arteta’s words, left his teammates with ‘a mountain to climb.’

It is now 476 minutes since Arsenal last scored a Premier League goal from open play, netted by Pepe against Sheffield United at the start of October.

With a three-game ban coming his way it will be a while before he gets another chance to trouble a Premier League scoresheet and opportunity to make amends to his teammates and a less-than-impressed Arteta.