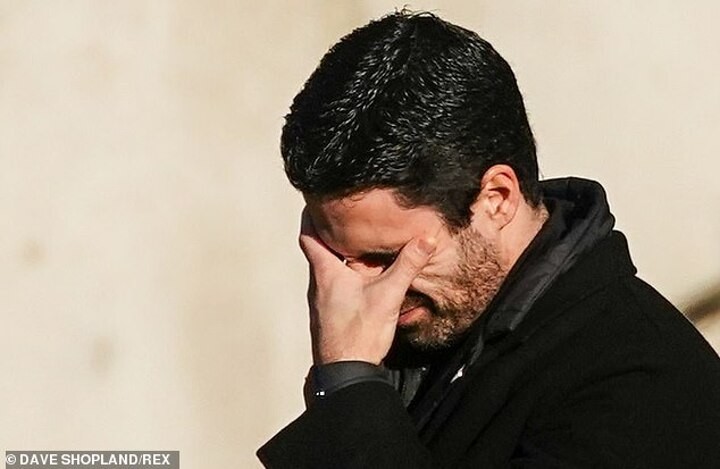 Mikel Arteta, of all people, ought to have recognised the importance of the FA Cup.

People doubt him as Arsenal manager but then they remember he won the FA Cup and for that, maybe, he deserves to be cut some slack. He did that in his debut season as a head coach, so let’s give him time, right? That’s wearing thin.

Now, it’s Gdansk or bust for Arteta. Arsenal have to get to the Europa League final in Poland for this to not be a season to forget.

Why not start Kieran Tierney at Southampton? Why not start Emile Smith Rowe? Why not start Bukayo Saka? Why bring in Willian at No 10? The Brazilian has been about as useful as a chocolate teapot this season. Nicolas Pepe hasn’t been much better. He’s been more of a £72million problem than solution.

This isn’t the Mickey Mouse Cup. This is the FA Cup, and the XI that Arteta selected at St Mary’s screamed surrender. Southampton went strong, Arsenal didn’t — and the result was predictable.

Maybe Arteta would have lost even if he’d fielded his first team. Southampton’s players look like they would run through brick walls for Ralph Hasenhuttl. We talk about their high press a lot, but it doesn’t get any less impressive when you see it in action. They hunt in packs. They win the ball then use it well. But Arsenal supporters could accept going down with a fight.

Saturday didn’t feel like that. It felt more like a waving of the white flag. Doing what he did only puts more pressure on Arteta.

He should have stayed loyal to the competition which has helped him keep hold of his job.

Speaking of resting players, why is it that clubs drop their first-choice goalkeepers for the FA Cup?

Chelsea played Kepa Arrizabalaga on Sunday instead of Edouard Mendy, and look what happened. He lets a tame shot slip beyond him.

Millwall drop Bartosz Bialkowski and his replacement, Frank Fielding, gives away a needless penalty to kickstart a 3-0 defeat.

Nottingham Forest drop Brice Samba and Jordan Smith concedes five in a 5-1 loss. This is something I’ve always found baffling.

A manager should always want his No 1 in goal in the Cup. That’s one selection Arteta didn’t get wrong!

A miserable existence for Newcastle

NEWCASTLE rank 20th in the Premier League for possession, 19th for passes, 19th for shots and 18th for shots on target. What a miserable existence.

Supporters of that sleeping giant in the North East deserve so much more than what they’re being served up. Manager Steve Bruce might live to regret those ‘gloves are off’ and ‘we will do it my way’ comments. That won’t help him.

The buck now stops with him because of what he said, and they were lifeless against Aston Villa on Saturday night. If that’s Bruce’s way, then it won’t win over the fans any time soon.

The lack of ambition at Newcastle under their owner Mike Ashley is alarming and sad. What have their supporters got to look forward to? Not much, unfortunately.

Fair play to Phil Foden, I would have left Manchester City

Some of his movement was Lionel Messi-esque on Saturday, regardless of whether it was against inferior opponents, and full credit to Phil Foden for the trust he placed in Pep Guardiola.

When I was his age, I wouldn’t have shown the same patience. I would have been itching to leave on loan, to get game time. But Foden stayed at Manchester City and now this classy 20-year-old looks like he could be a shining light for England at Euro 2020.

Guardiola has timed his development to perfection. Players can try different paths. Some fly, some fall. Jadon Sancho is someone who left City and is now a Borussia Dortmund first-teamer, so we cannot say he made the wrong decision.

But Foden certainly made the right call in staying put and waiting for his chance. He is growing into some player.

Offside law is in the spotlight

The offside law is very much in the spotlight now.

Manchester City got that goal against Aston Villa where Rodri was offside until he became onside because Tyrone Mings supposedly made a ‘deliberate’ play for the ball.

Then Villa benefit from Newcastle defender Fabian Schar making a ‘deliberate’ attempt to clear the ball which brings Ollie Watkins onside to score.

Neither of those goals felt right in the spirit of the game.

FA Cup is of huge importance for Frank Lampard

The FA Cup will become a very important competition for Frank Lampard. They’re now into the fifth round, where they will face Championship Barnsley.

For a club like Chelsea, merely making it into the top four might not be enough for Lampard, and that’s proving a challenge in itself.

He needs a trophy to go along with that. That is what an owner like Roman Abramovich demands. I’m not sure that will come in the Champions League, so the FA Cup is Lampard’s best bet. Avoiding a banana skin on Sunday was big.