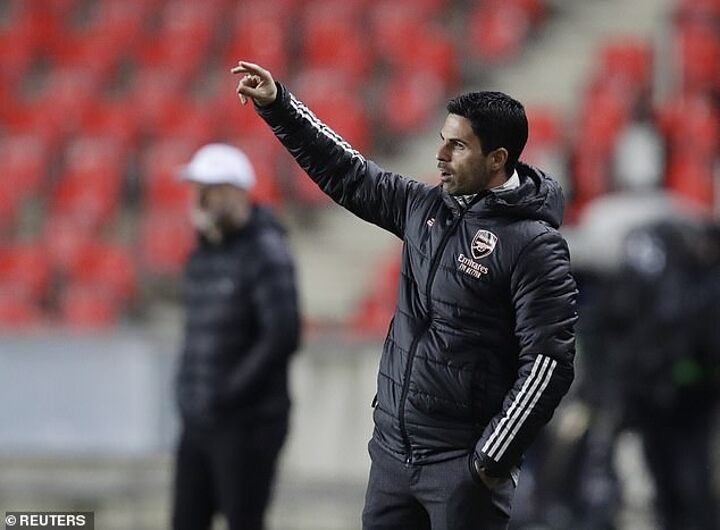 Mikel Arteta has warned his Arsenal players against making the 'big mistake' of focusing solely on the Europa League, with their Premier League season still salvageable.

The Gunners ruthlessly took apart Slavia Prague on Thursday to qualify for the semi-finals in Europe, leaving Arteta delighted but also demanding that those standards are met more consistently.

Sitting ninth ahead of Sunday's clash with relegation-threatened Fulham, Arsenal still have faint hopes of qualifying for Europe via the Premier League and Arteta has urged his players to pick up where they left off in the Czech Republic.

'It would be a big mistake (to forget the Premier League),' he explained.

'I love that phrase (putting all your eggs in one basket). My dad has always told me that since I was 15 years old.

'We cannot do that. The league is really important, there are a lot of points to play for.

'There have been a lot of changes in recent weeks in terms of the table and we want to be involved until the last match.

'The way to do that is to put a run together from now until the end of the season.'

Arteta has criticised his team's lack of consistency on numerous occasions this season, with the Gunners way off the pace domestically.

Strong performances in the Europa League have served as a bright spark and Arteta has called on his players to replicate their form in Europe in the final seven league matches.

'If you look at the performances and results that we've had against some of the more difficult opponents you would say, ''how is that possible?'',' he continued.

'It hasn't happened over the years at this club. But then for different reasons, we have conceded and given away a lot of points that have put our season under scrutiny.

'We've put ourselves in a position that we are not comfortable with.

'The form we've shown in the Europa League has been very, very positive and we have earned our place in the semi finals and we are thrilled to have the opportunity to get into that final.'