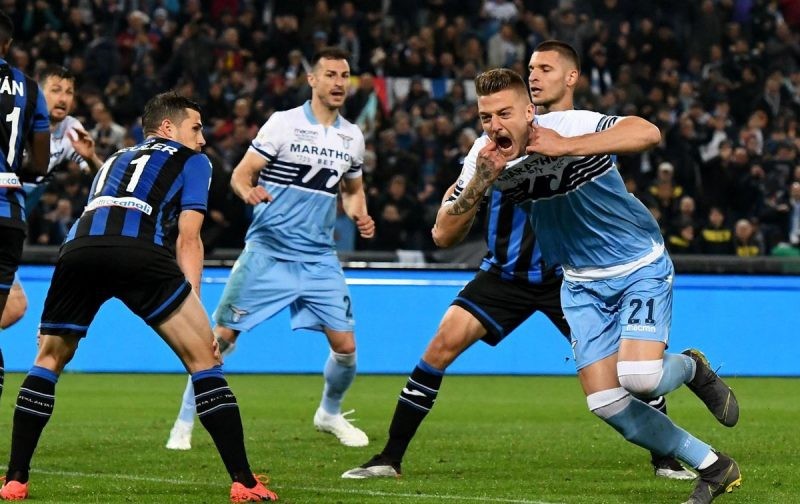 Late substitute Sergej Milinkovic-Savic made the difference as he inspired Lazio to a 2-0 win over Atalanta as the Biancocelesti lifted the 2019 Coppa Italia.

The Serb was only on the park for three minutes before grabbing just his second ever Lazio goal as a substitute, breaking the deadlock with his first touch, before Joaquin Correa wrapped things up with in the final minute.

Both sides had chances in what was a scrappy game, but it was Lazio who took the crown, breaking the hearts of La Dea fans everywhere, as they won their seventh Coppa Italia. Both sides started brightly, operating on the counter attack, but neither could create any real chances until Francesco Acerbi header over from just under the crossbar.

Another good headed chance came the way of Lazio, this time from Lucas Leiva but he could only put it wide.

Atalanta should have been ahead when a deflected volley from Marten De Roon had Thomas Strakosha beaten, but it smacked off the inside of the upright, then after some pinball in the box, Lazio saved off the line, before Zapata poked off target.

Joaquin Correa then found himself one-on-one with Andrea Masiello, but the Atalanta defender bundled the Argentine over just outside the penalty area, but was only given a yellow card for his troubles, much to the ire of the Lazio faithful.

After the break, Timothy Castagne drove an effort towards the near post, but Strakosha was well placed to make the save. A mistake at the back for Atalanta allowed Correa once again in on goal, but just as he was about to pull the trigger, Jose Palomino got across to make a brilliant tackle.

Papu Gomez hit the outside of the post form an impossible angle, but the deadlock was broken at the other end with just eight minutes left to play.

An inswinging corner from Lucas Leiva found the head of substitute Milinkovic-Savic who powered the ball past Pierluigi Gollini and into the net, sending the ‘home’ fans wild.

The game could have been wrapped up moments later when Correa was once again in on goal, but Gollini closed the angle and save from the Lazio No.11.

Correa did eventually get his goal, killing any hope Atalanta had, as he drove in on goal, rounded Gollini before smashing home.