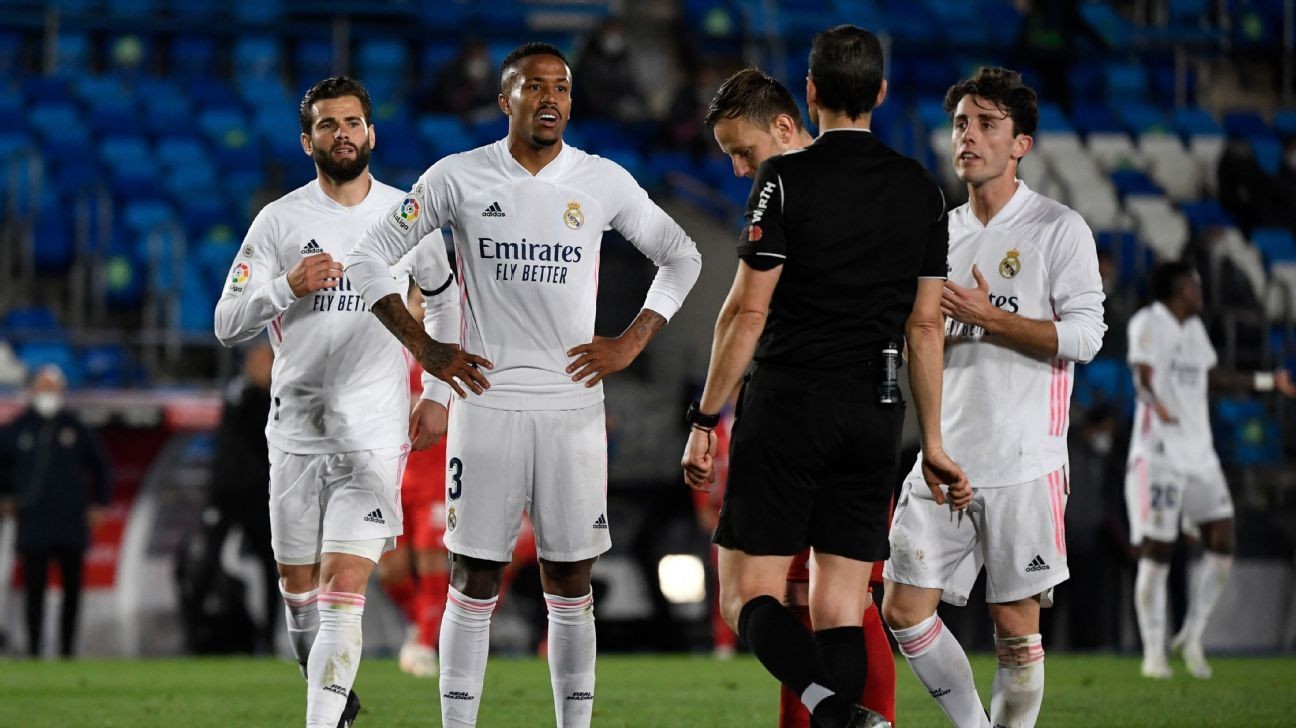 Real Madrid scored a dramatic 95th-minute equaliser to draw 2-2 with Sevilla FC on Sunday as the La Liga title race took yet another twist.

Sevilla dominated the first half before Karim Benzema had a headed goal ruled out for offside. Fernando put the visitors ahead on 22 minutes, stepping inside Casemiro to slot past Thibaut Courtois. Vinicius Junior shot off target and Benzema had an effort saved by goalkeeper Bono before half-time.

The home side were chasing the game until substitute Marco Asensio equalised, taking Toni Kroos' pass first time. Madrid then looked to have won a penalty when Benzema was fouled by Bono, only for referee Juan Martinez Munuera to overturn his decision and hand Sevilla a spot kick for a handball by Eder Militao. Ivan Rakitic scored it, and then Kroos' shot deflected in off defender Diego Carlos in added time to leave Madrid two points behind leaders Atletico Madrid and level with rivals Barcelona.

The pressure was on after Barcelona and Atletico's goalless draw a day earlier. That result put Madrid's title destiny in their own hands: win the four games that remained and they would be champions. A largely disappointing performance looked to have been turned around when sub Asensio found the net, and finally Madrid hit their stride, although that resurgence lasted barely 10 minutes before a potential match-winning penalty was turned on its head.

Madrid somehow found an equaliser, as they so often do -- and there is value in that -- but it remains to be seen if that will be enough to see them win the league in their last hope of silverware this season. At least this was their toughest test left out of the way, with Granada, Athletic Bilbao and Villarreal still to come.

Once the dust has settled on a frantic finale, Madrid will look back at this game as an opportunity missed. They were outplayed here for long periods by a Sevilla team expertly coached by former Madrid boss Julen Lopetegui. The team looked exhausted at times -- especially in midfield -- and ineffectual at others, and it was only through digging deep and relying on one last, monumental effort from the old guard that they managed to salvage a point.

6 -- Zinedine Zidane made his biggest call of the night before kickoff, benching Eden Hazard after the midweek fuss over his post-Champions League elimination laughter at Stamford Bridge. His other key selection decision saw Vinicius and Federico Valverde picked ahead of Asensio. This was not a good display overall, and it didn't reflect well on Zidane how often his team looked second best to Lopetegui's Sevilla here.

GK Thibaut Courtois, 6 -- His run of four league clean sheets in a row ended. Nothing he could do about Fernando's opening goal, and went the wrong way for the penalty.

DF Alvaro Odriozola, 7 -- Wasn't trusted against Chelsea, but returned here. Provided an outstanding cross for Benzema to score early on, but had strayed offside beforehand.

DF Nacho, 6 -- One of Madrid's more consistent performers this year. Led a defence that struggled to cope with a strikerless Sevilla in the first half.

DF Eder Militao, 5 -- Has impressed repeatedly since coming into the team last month, but this has been a more difficult week. Gave away the crucial penalty with a raised arm.

DF Marcelo, 6 -- Started, wearing the captain's armband, and had a tough time. Only lasted 65 minutes.

MF Casemiro, 7 -- Saw shots fly wide in both halves, and got forward constantly as the team desperately tried to get something from the game. Could have scored a winner right at the end.

MF Toni Kroos, 8 -- Some lovely touches at times, even as the Madrid midfield was frequently overrun. Created Madrid's goal with his pass for Asensio and then saw his shot turned in by Hazard for the equaliser.

MF Luka Modric, 6 -- Once again it fell to Modric to try to orchestrate Madrid's comeback here. His 29th league start this season, and all of those minutes are starting to take their toll.

Super League saga rumbles on: Will Real Madrid, Barcelona, Juventus be banned?Hazard and Real Madrid still have La Liga to play for, if they can get over his laughterHazard slammed by emotional TV host for laughing with Chelsea players

MF Fede Valverde, 6 -- Started on the right after first returning from his COVID-enforced absence in midweek. Still doesn't appear to be fully fit.

FW Vinicius Junior, 7 -- One early moment summed him up, beating Diego Carlos with some clever skill before losing his footing in the box. Later skipped between two defenders only to shoot wide.

FW Karim Benzema, 7 -- What goal threat Real Madrid posed came through him. Unlucky to see a well-taken early header chalked off for offside, and had a shot saved by Bono later in the first half. Won a penalty, only to see play brought back for another at the other end.

FW Marco Asensio, 7 -- Came on for Modric and made an immediate impact, scoring the equaliser. He's now Madrid's third-highest scorer in La Liga this season, behind Benzema and Casemiro.

FW Eden Hazard, N/R -- Played the last 10 minutes and almost got a touch on Kroos' shot to save a point for Madrid.