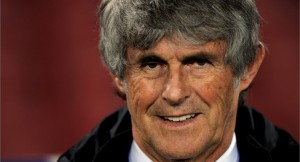 Having been at the helm of no fewer than five different national sides spanning five FIFA World Cupâ„¢ final tournaments, Serbian strategist Bora Milutinovic is synonymous with the greatest show on Planet Football.

A hard-working but relaxed supremo, Milutinovicâ€™s first finals as a head coach came with the host nation at Mexico 1986, where he tookÂ El Tri to the last eight. Since then the globe-trotting tactician has coached Costa Rica at Italy 1990,Â USA on home soil in 1994, Nigeria at France 1998 and China at Korea/Japan 2002.

Currently in South Africa, where he led Iraq at last yearâ€™s FIFA Confederations Cup, the Serb is working as an ambassador for Qatarâ€™s bid to host the 2022 FIFA World Cup, as well as keeping Chinese audiences up to date via a regular blog. The well-travelled boss was also happy to give his expert opinion to FIFA.com on Sundayâ€™s Final between the Netherlands and Spain, as well as South Africa 2010 as a whole.

FIFA.com: Bora, should your current roles permit, would you like to get back into coaching? Bora Milutinovic: Of course! Iâ€™m a coach, my life is out on the pitch. Iâ€™ve got the enthusiasm and everything else you need to work well, but of course I have my demands and goals I wish to achieve. Taking on another coaching role would be ideal, but itâ€™d have to be a team with a genuine chance of reaching the World Cup.

Given your extensive knowledge of the FIFA World Cup stage, are you surprised the likes of Brazil, Argentina, Italy and France have all packed their bags? You need to be aware of the difficulties some teams go through. France and Italy, for example, have been hit by the usual setbacks you find when bringing through a new generation of players. And these are the kinds of setbacks that come to the fore at key moments. [Marcello] Lippi assembled a great team four years ago but wasnâ€™t able to do so this time around. If new players donâ€™t make the breakthrough then itâ€™s hard to achieve great things. The Italians should take a close look at what went wrong.

As the man who coached Nigeria at France 1998, whatâ€™s your verdict on the performance of the African teams? Nigeria are very talented on an individual level, as was proved at the 2008 Olympic Games. However, changing coaches such a short time before coming to South Africa affected their prospects. Itâ€™s not easy to assemble a competitive team, never mind a settled squad, with such a short space of time in which to work. Ghanaâ€™s case was different, and Iâ€™d like to point out that they had a Serbian coach in Milovan Rajevac. He was able to adapt quickly and incorporate the talented youngsters that won the U-20 World Cup (in 2009). They did a great job, keeping one eye on the future, and only went out on penalties. Itâ€™s very good news for African football.

Why do think Mexico have not reached the quarter-finals since you coached them back in 1986? Itâ€™s tough, theyâ€™re always there or thereabouts but they canâ€™t seem to overcome that barrier. We did it in 1986 when we went out to Germany on penalties, but a lot of factors have to come into alignment for the team to reach that elusive fifth match. This time they again played very well against Argentina, but couldnâ€™t get over conceding the first goal and desperation ended up taking hold. I think that itâ€™s down to an emotional thing: the playersâ€™ desire to reach the quarters is so intense that they end up losing their way.

CouldÂ El Triâ€™s relative youth have been a factor at key moments? Of course, itâ€™s not easy breaking into the last eight of a World Cup. Giovani dos Santos and Javier Hernandez, who were the teamâ€™s two most outstanding players, are very talented but arenâ€™t used to playing in such big matches. That said, when you put them alongside the likes of [Andres] Guardado, [Carlos] Vela and [Pablo] Barrera then Mexico are sure to have a bright future.

Speaking of individuals, which players caught your eye at South Africa 2010? Itâ€™s no surprise that [Diego] Forlan should get a mention, as heâ€™s been Uruguayâ€™s most influential performer. Then there are several others that have earned a lot of plaudits such as Dutch duo Arjen Robben and Wesley Sneijder, but the guy I really like is Mark van Bommel. Germany too deserve a mention. Many people felt theyâ€™d struggle without [Michael] Ballack, but Mesut Ozil and Thomas Muller have really risen to the challenge. Theyâ€™re fantastic!

What about Lionel Messi? After seeing him in Argentinaâ€™s first game against Nigeria I thought this would be his tournament. His dynamism and ability to make the play were astonishing. He also showed a level of enthusiasm which, unfortunately, was nowhere to be seen in their last match against Germany. But he wasnâ€™t the only one: there were lots of players who were expected to recreate their club form and couldnâ€™t manage it.

Finally, who do you think will lift the Trophy on 11 July? Netherlands are a great team, whoâ€™ve been able to beat big teams like Brazil and Uruguay. They are very fast breaking from midfield into attack, but I see Spain as the stronger team. Theyâ€™ve come through a very difficult group and have just beaten no less a team than Germany in the semi-finals. I think theyâ€™ve got a better chance of success.