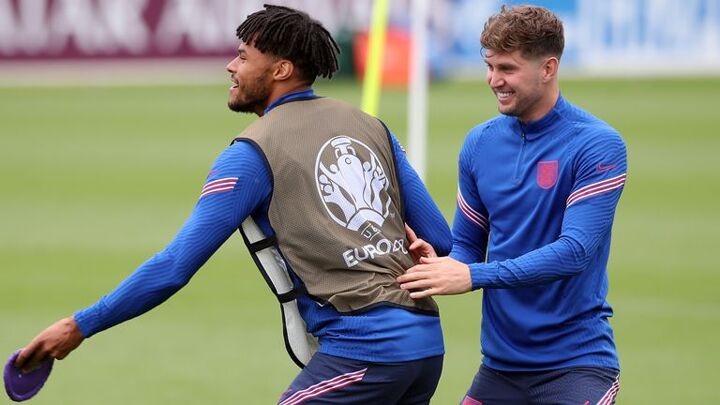 Tyrone Mings and John Stones are set to keep their places in England's starting XI to face Scotland, with Harry Maguire returning to the squad on the bench, Sky Sports News has learned.

Gareth Southgate said in Thursday's pre-match press conference that Maguire "will be involved" in Friday's Group D game at Wembley.

"The decision we've got to make is whether he is ready to start, but we are really pleased with his progress," the England boss continued.

Sky Sports News has been told Southgate wants to give Maguire some game time as soon as possible, but doesn't feel it's a good idea to throw him straight into a match that is expected to be particularly physical and will be played on a wet pitch.

Instead, the strong performances of Stones and, in particular, Mings in England's 1-0 victory against Croatia in their opening game means Southgate is loathed to disrupt a successful defensive partnership.

Maguire has missed almost six weeks of competitive football with an ankle ligament injury, and has been undergoing a course of rehabilitation and strengthening overseen by the FA medical team.

Southgate is, however, thought to be considering changing both his full-backs for Friday's game, handing starts to Reece James and Luke Shaw ahead of Kieran Trippier and Kyle Walker.

Walker started England's win against Croatia on Sunday at right-back, while Kieran Trippier played out of position as the starting left-back.

Chelsea right-back James, 21, has not played since his club beat Premier League champions Manchester City to win the Champions League on May 29.

Manchester United left-back Shaw started the 1-0 pre-tournament friendly win against Romania on June 6, but was an unused substitute against Croatia.

Chelsea's Ben Chilwell - the other recognised left-back in Southgate's Euros squad - was not named in the 23-man matchday squad for their first game of the tournament.

England will qualify for the last 16 with victory against Steve Clarke's Scotland, who opened their campaign with a 2-0 defeat against Czech Republic on Friday.

Neville: England won't get carried away

Sky Sports pundit Gary Neville said of the important Wembley clash: "I don't think the England players will get carried away with the emotion, and I don't think Gareth Southgate will. Gareth doesn't tend to get too high when they win a game, or too low when they lose a game. He's seen a lot of international football, has seen a lot of tournament football, and understands what can happen.

"I think his game plan for Friday will have been set even before Croatia, and I don't think that will change. He's really methodical, and knows how he's going to tackle each game. That will be set.

"It will be more interesting to see how Steve Clarke reacts to their defeat in the first game, there may be an emotional reaction that they need to be more attacking and proactive. But that would suit England, if Scotland came out and attacked, they could then play their football a little bit more. It's important for both managers to remove emotion from this match, and stick to their game plans.

"I am sure Southgate will, it's whether Steve Clarke reacts to the fact they had a disappointing first result against Czech Republic."

'Adams was tackling a wall!' The Boys of 96: England stars on Seaman's save, Gazza's goal and that celebration against Scotland

Mark McAdam has got the boys back together. The reporter has tracked down England's stars of Euro 96 - and, ahead of England vs Scotland at Euro 2020, they tell us the inside story of the famous clash between the two teams at Wembley 25 years ago.

Gary Neville, Jamie Redknapp, Gareth Southgate, Teddy Sheringham, Paul Ince and Stuart Pearce lift the lid on what it was like inside the England dressing room before that dramatic match, the key turning points in the contest, and how the victory ultimately propelled England to the semi-finals.

For more behind the scenes stories of England's adventures at Euro 96, you can watch The Boys of 96 on Sky Sports News and the Sky Sports YouTube channel.