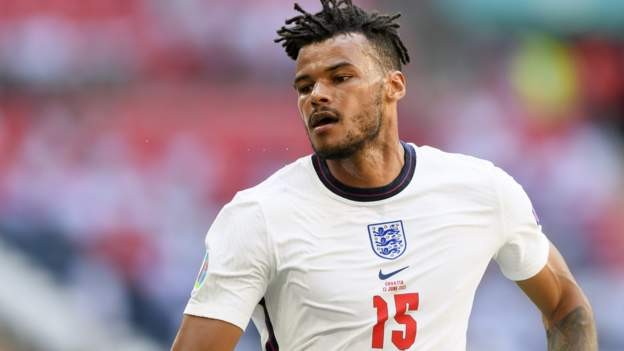 England defender Tyrone Mings says his "mental health plummeted" in the build-up to Euro 2020 because he felt people were doubting his place in the side.

Mings, 28, spoke with a psychologist to help him cope with the pressure.

"When 90-95% of your country are having doubts over you, it's very difficult to stop this intruding on your own thoughts," he said.

In an interview with the Sun,external-link Mings added: "I did have a tough time in the lead-up to the opening game against Croatia.

"I think I'm a lot more hardened to outside influences now, but my mental health did plummet.

"And I have no shame in admitting that because there were so many unknowns about me going to that game.

"I was probably the only name on the team sheet that people thought, 'not sure about him'. And that was something I had to overcome.

"So I did a lot of work on that with my psychologist. I was given a lot of coping mechanisms - whether it was breathing, meditation, or just learning how to bring yourself into the present moment. To stop letting your subconscious take over.

"It was hard. I didn't really sleep very well before that first game."

Mings helped England keep a clean sheet as the Three Lions began their Euros campaign with a 1-0 victory at Wembley. Six days later he helped them to another shutout as they drew 0-0 against Scotland.

He was voted England's second-best performing player in both matches by BBC Sport website readers.

Maguire returned to the side for the final group game against the Czech Republic, with Mings coming on as a late substitute in the 1-0 victory.

The former Bournemouth player took part in a BBC documentary alongside Prince William last year on the importance of looking after your mental health.

Mings revealed he regularly speaks with a psychologist in between games, having first sought support while he was recovering from a serious knee injury.

The man who introduced Joe Wicks to meditation: Exploring spirituality and mindfulness with Russell BrandThe Ancient Olympics: You're Dead To Me explores how even death couldn't stop you winning