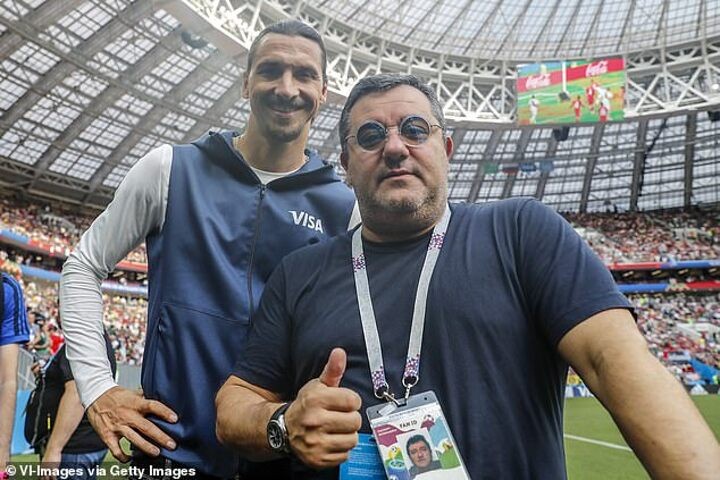 The AC Milan striker is considering legal action after he called out FIFPro and the FIFA video game series on Twitter on Monday night as he ordered an investigation into who permitted the game to use his name and face.

Gareth Bale tweeted his support of Ibrahimovic while Raiola claimed in the Telegraph that there are 300 players ready to join the Swedish striker in his fight with EA Sports.

Raiola appeared on talkSport to speak his case on the matter and ended up clashing with former Crystal Palace owner Simon Jordan.

Raiola was asked by Jordan why he hadn't done anything before to which the super agent said 'everything has its right times'.

Jordan responded: 'No, hold on this is either about stopping Zlatan's image or it is about money.'

'This is about money, this is about rights this is about who can exploit who's rights and it's a principle, and why we don't do things before or after is a call that we will make which we don't need to explain now.'

Jordan commented that if Raiola goes to court 'on principle' he would lose to which Raiola sarcastically commented: 'You're the best guy in England, not in England, in the world.'

The former Crystal Palace owner asked Raiola not to be facetious before commenting: 'What this is about is someone like you popping up saying we're missing an opportunity here. And ultimately, I can monetize that and of course I'll be paid a commission on that.'

Raiola responded: 'You know what the nice thing is, I don't give a damn about what your opinion is okay? That's the thing here. What you think of me is totally meaningless.'

Jordan said that he had no opinion of Raiola and that the super-agent was as 'troublesome to him as a cloudy day'.

Ibrahmiovic's agent gave one final response before hanging up on Jordan and presenter Jim White.

'And I think that this talk is now over Jim because you need to give Simon his own program. Invite me as Jim and not as Simon, have a nice day and have fun with Simon there you should have a one-man show bye.'

It's not the first time the pair have come to heads on TalkSport with Jordan accusing Raiola of 'creating a culture of division' between Manchester United and Raiola's agent Paul Pogba earlier this year.

Ibrahimovic threatened a major row with the award-winning and hugely popular FIFA series when he tweeted this week: 'Who gave FIFA EA Sport permission to use my name and face? @FIFPro? I'm not aware to be a member of FIFPro and if I am I was put there without any real knowledge through some weird manoeuvre. And for sure I never allowed or FIFPro to make money using me.

'Somebody is making profit on my name and face without any agreement all these years. Time to investigate.'

Tottenham star Bale also joined in the questioning, and responded saying: '@Ibra_official Interesting... what is FIFPro?#TimeToInvestigate.'

But the developers, EA Sports, insist that the 39-year-old striker's issue lies with the union which represents around 65,000 players across the world, FIFPro, instead.

'The licensing arguments being played out in social media for effect are not an issue for EA or EA Sports. This is between FIFPro, the players within their association, and their representatives,' the developers told Forbes.

'FIFPro has told us this is their issue, and they're handling it ⁠— we expect a statement to that effect imminently.

'This isn't our fight. This isn't about EA Sports or video games, players or fans. It's a battle between football agents and FIFPro.'

EA claimed that they worked closely with Raiola to help market FIFA 21 by using one of his clients, Erling Haaland. They also say that have 'enjoyed a great working relationship' with Ibrahimovic.

In the summer AC Milan revealed a collaboration with EA Sports meaning gamers can play as the Serie A giants at the San Siro stadium.

'We are delighted to welcome EA Sports to the AC Milan family as a Premium Partner. This partnership is symbolic of our commitment to delivering world class interactive experiences to our fans all over the world,' AC Milan's chief revenue officer Casper Stylsvig said.

'As a market leader in the world of gaming, in EA Sports we have the perfect partner to help us continue on our journey of engaging and exciting the next generation of Rossoneri fans.'

Ibrahimovic is yet to respond to EA's statement.