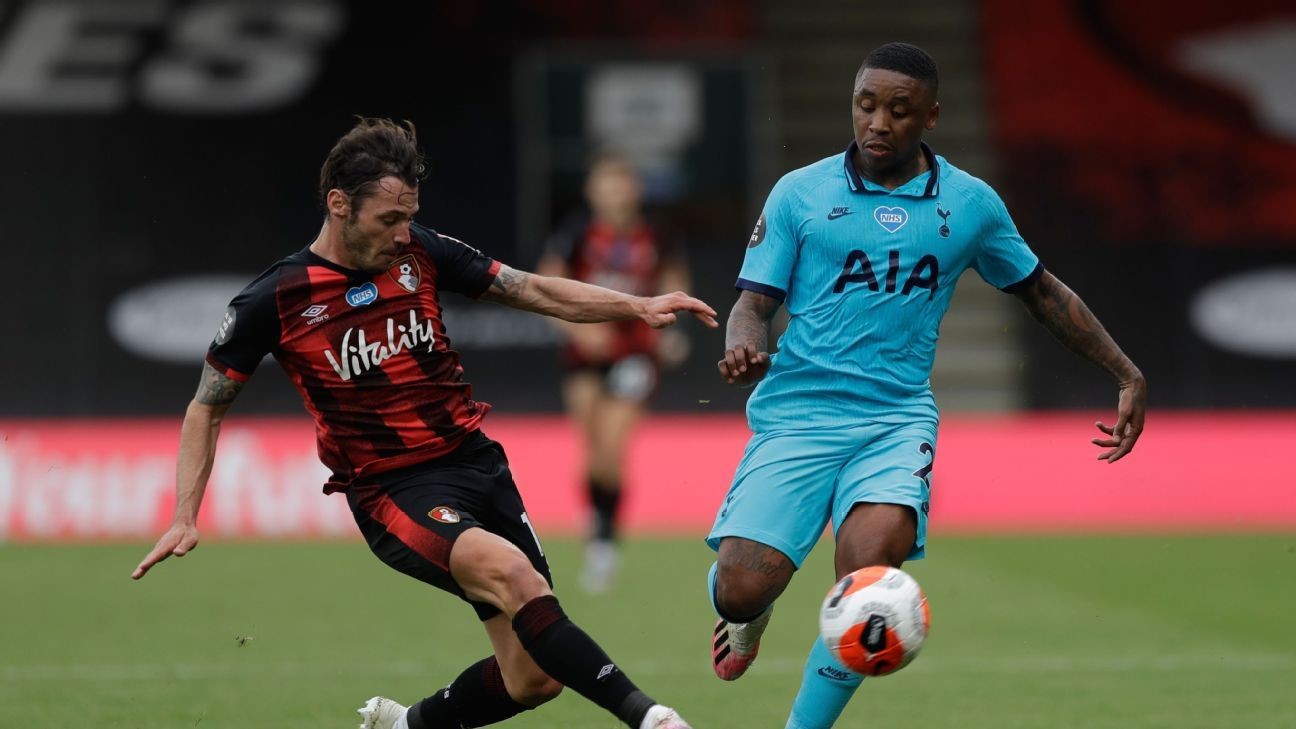 Tottenham's hopes of European football next season suffered another setback as Jose Mourinho's side were held to a 0-0 draw at relegation-threatened Bournemouth.

The visitors were unlucky not to be awarded a penalty inside the opening minutes when Joshua King appeared to bundle over Harry Kane, but beyond that they produced a lethargic display in which they failed to register a single shot on target.

It could have been worse too as Callum Wilson looked to have steered home an unlikely winner with an acrobatic effort, only for VAR to chalk the goal off for a handball by King.

-- What did you miss? The latest from Europe's top leagues
-- Soccer is back! Stream ESPN FC Daily on ESPN+ (U.S. only)

Jose Mourinho won't be feeling too cheery after this one, but his side did at least record back to back clean sheets for the first time this season, while Hugo Lloris produced a huge late save on Harry Wilson to earn his side a point late on.

Spurs looked like a side low on confidence and their opponents seemed to sense it as they looked to get on top of the visitors. When Spurs did have the ball, they were too slow and too sluggish in an uninspired performance that leaves them languishing in ninth.

6 -- It was another frustrating evening for Mourinho who was unlucky not to see his side awarded an early spot-kick. His side provided a pretty dismal display thereafter but in fairness, his substitutions lifted the team a little.

GK Hugo Lloris, 7 -- Commanded his area well and reacted swiftly to claw away a goal-bound effort from Junior Stanislas to keep the scores level. He will be thankful to VAR for preserving his clean sheet, which he sealed with a superb save to deny Wilson.

DF Serge Aurier, 7 -- Started brightly with a typical sprint down the right and the Ivorian was unfortunate to see an inviting low cross flash across the face of goal when all it needed was a touch. Had to wait almost 25 minutes for his next opportunity to do the same when another good cross was superbly defended by Nathan Ake, but was Spurs biggest attacking outlet on the night.

DF Toby Alderweireld, 6 -- Found himself playing alongside a familiar face in compatriot Jan Vertonghen -- a partnership that brought Spurs so much success when it first came to fruition. Far from an eye-catching display, but in truth he didn't have too much work to do as Spurs registered a second consecutive sheet.

DF Jan Vertonghen, 6 -- The Belgian showed a cool head to repel Diego Rico's cross from the left, but was later relieved to see his goalkeeper save after his headed clearance dropped kindly to Stanislas. He survived a penalty-appeal when Callum Wilson hit the deck, but was just about good value for his clean sheet.

DF Ben Davies, 6 -- Dealt a sore blow by Wales teammate David Brooks and he'd probably try to convince you that was the reason that his next involvement -- a cross from the left deep in Bournemouth territory -- sailed out for a goal kick. Did do well to head away an awkward Stanislas free kick from the right and was steady overall.

MF Moussa Sissoko, 5 -- Calm and composed in spells as the visitors looked to work the ball down both flanks early on, but his impact was minimal. Picked up his eighth booking of the season for a fiery exchange with Jefferson Lerma, but he didn't channel that fire constructively in a flat performance.

MF Harry Winks, 6 -- Positioned himself in the perfect area to cut out a dangerous cross from Stanislas as the hosts looked to build their attacks down the left. That epitomised a display in which he was asked to get through plenty of defensive work and did well for the most part.

MF Giovani Lo Celso, 5 -- The electric Argentine started his fourth consecutive game in a Spurs shirt for the first time but his involvement was far from notable here. Did his best to find pockets of space with a couple of darting runs and carefully-threaded through balls, but was withdrawn at the break.

January signing Steven Bergwijn was anonymous as Spurs failed to register a shot on goal at Bournemouth. Photo by MATT DUNHAM/AFP via Getty Images

FW Erik Lamela, 5 -- A frustrated display was epitomised by a couple of clumsy challenges and a wild effort from distance. One glancing header from an Aurier cross almost nestled in at the back post.

FW Harry Kane, 6 -- The prolific forward came into the clash in pursuit of his 200th career goal but never really looked like grabbing it. He produced a crucial header inside the six-yard box, but it came on the defensive end as he nicked the ball away from Lerma to keep Spurs level. A frustrating evening for the skipper who was isolated for almost the entire contest.

FW Steven Bergwijn, 4 -- Made one bursting run down the left in pursuit of a threaded pass from Lo Celso, but he produced little and was withdrawn by a frustrated Mourinho at the interval.

MF Tanguy Ndombele, 6 -- Replaced Lo Celso at the break and injected some much-needed energy into the Tottenham midfield that clearly lifted the visitors. Flattened Wilson with a reckless challenge that saw him go into the book.

FW Son Heung-min, 6 -- Came on for the ineffective Bergwijn at half-time and almost had an immediate impact, but Ndombele's searching cross couldn't quite pick him out. Provided a couple of dangerous crosses as Spurs upped the ante late on, but didn't really provide enough support for Kane.

FW Lucas Moura, N/R -- The Brazilian's introduction moved Spurs up about two gears as his side increased the pressure on the Bournemouth back four. That said, he was unable to craft a winner for his side.