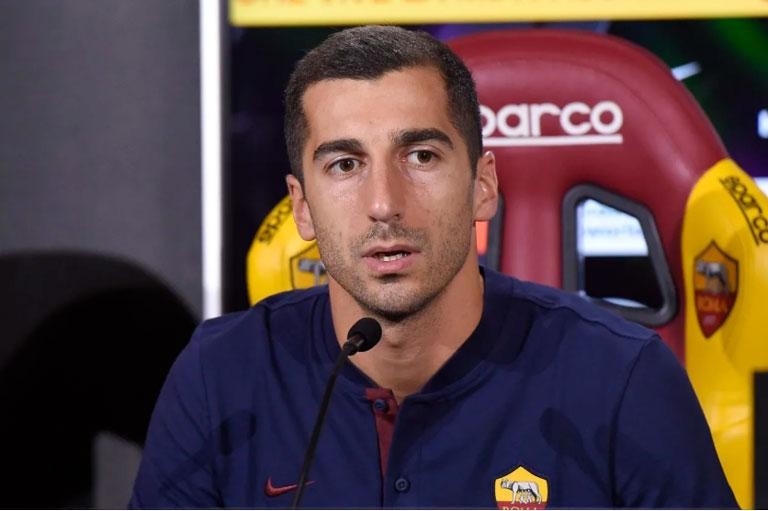 Deadline-day signing Henrikh Mkhitaryan held a press conference on Tuesday, as he was formally presented to the media as a Roma player.

Mkhitaryan, 30, joined the Giallorossi from Premier League side Arsenal on a season-long loan deal last week, before heading out on international duty with Armenia.

Fine individual performances against both Italy and Bosnia & Herzegovina have subsequently got Roma fans excited, and the playmaker is hopeful he can live up to expectations over the coming campaign.

“I am happy to be here,” Mkhitaryan said. “It has been a hard time [for me] before coming here and now I start a new adventure. I know where I am coming, I know what the team is playing for, what the goals are for this club and of course I will do my best to help achieve those goals.

Where do you think you will fit best in the team?

“Well I can play in every offensive position, it does not matter – from the right, the left, or behind the striker. I feel more useful when I am helping the team. I don’t think there is a big difference playing from the right or the left, because in the end you are coming inside. I think that is my quality, to cut in from the flank towards the middle – so I think I can be useful to the squad with my qualities.”

You have already faced a few of your new teammates on international duty. Did you speak to them today?

“It was the first day [today], and yes I met the players I played against with national team. We discussed a bit the game against Italy with Alessandro [Florenzi], and we also discussed about Roma and Italy. The same with Edin [Dzeko], we talked about the game and today at training we had the opportunity to discuss more about the game, the episodes and the goals and everything else. But now I think the national team is behind us and we have to be focused on the games Roma have.”

In your career you have scored a lot, especially with the national team, but perhaps fewer in the Premier League. What do you need to do to score more goals again?

“First of all with the national team I play behind the striker, so I have more freedom to move wherever I want, to drop back, to take the ball – but at the end I have to be in the box to try and help finish chances. But at Arsenal and Manchester United my role was different, I was more responsible for helping to build the play and perhaps that is why I scored fewer goals. But I am trying to do my best to score and assist because that is what I get pleasure from.”

You played at Shakhtar before Paulo Fonseca joined the team. Did you watch your old club and what did you make of his style?

“I have been following Shakhtar’s games in the Champions League and in the league. I haven’t been analysing the game in detail but I have been watching and they have been playing very impressive football, very offensive. That is what was impressing me, a side like Shakhtar playing very offensive against big clubs. They won some of those games and I hope he can bring that quality to Roma too and we can play offensive style and make the fans excited.”

Do you feel under pressure to perform for the Roma fans? And what do you think about the transition to Serie A TIM?

“I got a lot of messages from Roma fans after the Italy game - and the Bosnia game too. They were happy with my performance, and so was I. But as I said now I am focused on Roma games, I want to do my best for the club. I am not afraid of pressure, if you are a big player for a big team you are always under pressure and people will be watching your every step. If you do well they will praise you, if you make a mistake you will be criticized too. I am 30 years old and I know how to handle criticism, I am not afraid.

Would you like to return to the Premier League, or is this a definitive choice to leave?

“I left England – I don’t want to talk about England anymore because I want to be focused on Roma and Italian football. I don’t think it is a step back because it is a big club, a great club and everyone knows about it. I think maybe I was not fitting so well in English football, so I think a change was good. I’ve heard from many, many players that the Italian league is great, the football is great. The last month at Arsenal I was not getting pleasure, so that’s why I said it was better to come to Roma and to get happy and to get the pleasure from playing football again.”

How could Arsenal let a player like you leave on loan?

“It is a hard question. It’s difficult for me to say - I am not in the Arsenal board, I cannot say. I think it was because it was my wish [to leave] a lot. I knew I was not going to play a lot – maybe I would sit on the bench, like I did the last three games before the international break. I knew here I would have more opportunity to play, because there is the league, the cup, the Europa League. The decision was not easy for Arsenal to let me go, but thanks to Roma’s sporting director and board they were able to do it and hopefully I can show why they wanted to do that.”

You missed out on last season’s Europa League final due to geo-political tensions. Do you think you will have travel issues to Istanbul for the Europa League against Istanbul Basaksehir too?

“No, I won’t have any problems. We have played a lot of games there before. Armenia-Turkey is not the same as Armenia-Azerbaijan. Yes, there is an old history but the people have forgotten about it. I have never had a problem playing in Turkey, for pre-season, for Europa League, for Champions League and I don’t think I will for this group game.”

“I was very young when I went to Germany. With my teammates they can help me to adapt, to the league, to the city, to everything. That would be great, I would be grateful to them for that. But I think it is up to me to integrate to the team, to the league. Of course I will do my very best, because the time is short – it’s a one year loan. I want to do everything I can as quickly as I can to help the side and help the team.”

Have you spoken with the coach yet? And do you think you could start the next game, against Sassuolo?

“I have spoken with him, I have spoken about different things. No-one is to secure to play for the next game because there are still four or five days until the match. I still haven’t trained yet – today was a recovery day – so tomorrow will be my first day in training. So it is up to him, if he wants me to be on the bench, to start, whatever he wants then I am ready. But I will work hard in training, do my best every day to be ready, because it’s a one-year loan and I want to show what I can do and help the team.”