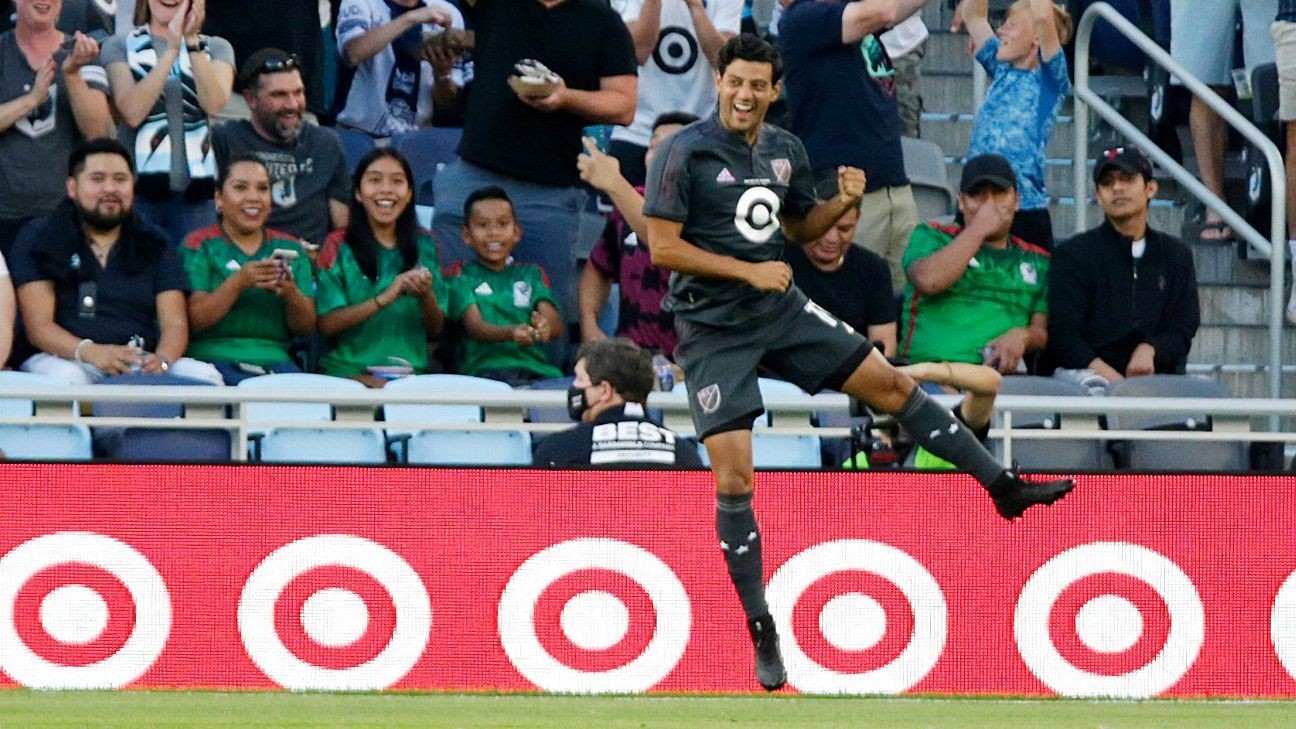 ST. PAUL, Minn. -- On any given Wednesday night, you'll undoubtedly find countless Golden Boot winners and superstar strikers patrolling central midfields all over the world -- you just need to find the right FIFA lobbies. Outside of PlayStation and Xbox, though, any manager making their No. 9 carry water in the team's engine room would have all manner of questions to answer for after the match. Unless that coach is managing the MLS All-Stars.

Minnesota United boss Adrian Heath fielded Austin FC forward Sebastian Driussi (who has 16 goals in 24 regular-season appearances; two more than his nearest rival) on the left side of a midfield three in the 2-1 win over Liga MX All-Stars.

"I was jokingly talking about it today; I had like seven or eight No. 10s to try and fit into a shape," Heath said after the match of the challenge in fielding a team so heavy in attacking talent.

The other No. 8 in that midfield, flanking Darlington Nagbe? Emanuel Reynoso, one of the league's premier playmakers, who also took the set pieces for the MLS team. Why was the Loons' No. 10 chosen ahead of others in such an immensely talented team? "'Cause I'm in charge," Heath joked. "I could tell who was going to take what." And that captures the essence of the All-Star Game. This is fantasy football come to life.

None of the announced 19,727 attendees at Minnesota's handsome home of Allianz Field will feel slighted. This was as intense as an exhibition can be. After the hosts opened up a 2-0 lead through Carlos Vela's header and Raul Ruidiaz's penalty. Kevin Alvarez's 84th-minute goal halved the deficit to bring the large contingent of Mexico fans to their feet and fill the ground with equal measures of anxiety and enthusiasm for the game's final few moments. It was a victory on the field for MLS, but the night on the whole was a win for both leagues.

As Liga MX and Major League Soccer continue to grow closer, though -- this was the second All-Star Game to pit the leagues against one another, while next season's reinvented Leagues Cup will see both leagues pause their domestic seasons so all of their 47 clubs can take part in the month-long group-stage-and-knockout-format tournament -- the novelty and necessity of this All-Star format feels like it's already waning.

Of the top five goal scorers from Mexico's Clausura tournament that concluded in May, just one was in the Liga MX squad: German Berterame of Monterrey. None from the current Apertura tournament was included. Their regular season resumes barely 24 hours after the full-time whistle blew in Minnesota. It's difficult, then, to feel that this was the best that Liga MX has to offer.

The rivalry that exists between Mexico and the United States men's national team carries real weight in this part of the world, and it's clear that both MLS and Liga MX want to capture that feisty, intense spirit, yet All-Star Games are inherently lacking in that department. There's no bite, and there isn't a lot of bark, either.

There will be plenty of that next summer at Leagues Cup, when we can enjoy what is a World Cup-style tournament format contested exclusively by these leagues' teams. Undoubtedly more when Mexican clubs will set out to demonstrate that the Seattle Sounders' CONCACAF Champions League triumph -- the first by an MLS club in its current format, and first continental trophy by an MLS club since 2000 -- was a fluke, and that Mexico truly is home to the best clubs in the region. But there wasn't any on Wednesday.

This is the infancy of what should be a hugely fruitful partnership between MLS and Liga MX, and that's exciting for the leagues, the players and the fans. But four years since this tandem introduced their intentions to tag-team world soccer, launching the Campeones Cup and setting them on course for All-Stars and Leagues Cups, they're already flirting with market saturation.

And yet, there was considerable buzz at Allianz Field surrounding a fifth competition between these two: the Skills Challenge. It was fun. It was different. That's something that MLS, as a league, should embrace.

This summer, MLS clubs welcomed European powerhouses -- the kind of teams that in years past would have been scheduled to take on the league's All-Star Teams -- and in several cases were competitive. Three weeks ago to the night, Minnesota trounced Frank Lampard's Everton 4-0 right here in St. Paul.