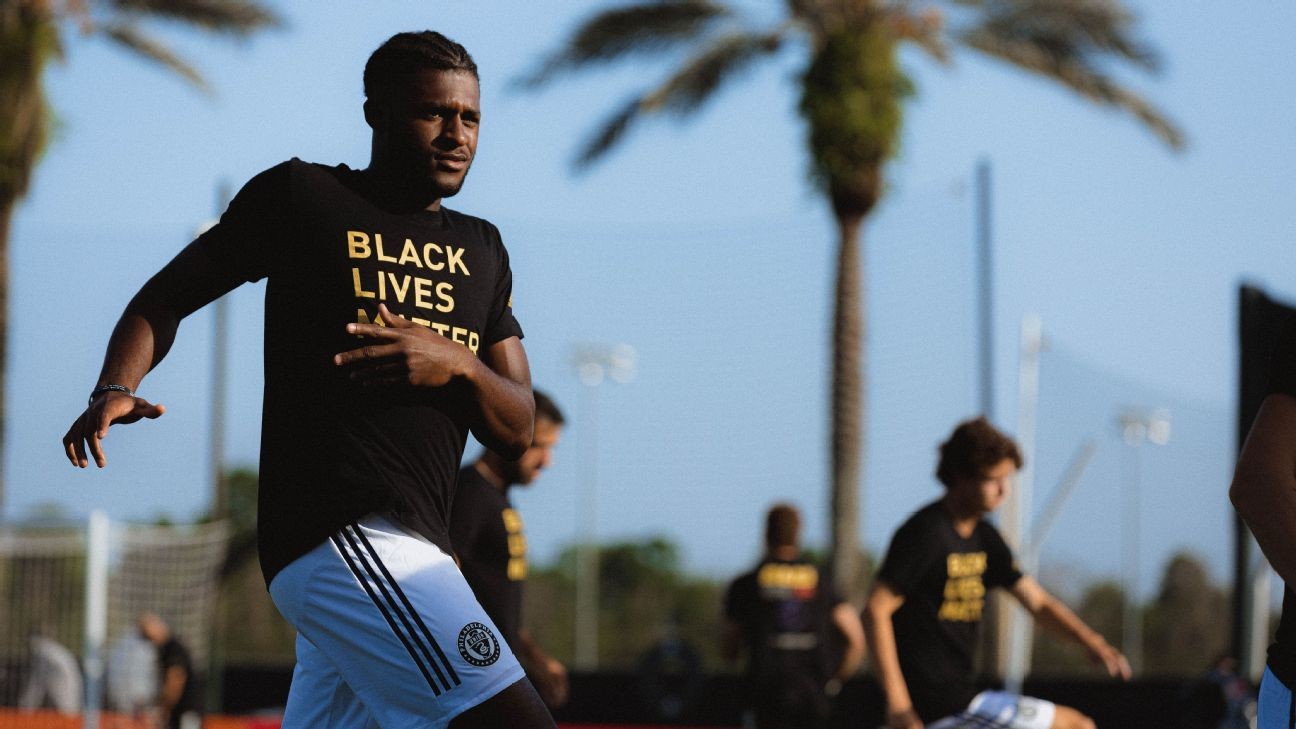 While these are unusual times and the MLS is Back Tournament is an unusual sporting event, Major League Soccer players usually wouldn't play any earlier than noon.

"The last time any of these guys played a 9 a.m. game was probably youth soccer," added Joey Harty, Sporting's director of sports performance and science.

So for this tournament in Orlando, with six matches scheduled for 9 a.m. ET kickoffs amid the midday heat and humidity of Central Florida, a dozen clubs have been figuring out how to get their players ready to perform so early. Several have been training earlier than 9, and one scheduled a 9 a.m. scrimmage before leaving its home market to simulate what this will feel like. But from the moment teams wake up, arguably the biggest concern will be food.

- Stream MLS is Back on ESPN networks, App | FC Daily on ESPN+
- Carlisle: Why your team will win MLS is Back ... and why it will not

The four clubs ESPN spoke to for this story had varied opinions on the optimal time to serve a pregame meal. The shortest turnaround was two hours before a 9 a.m. kickoff, and the longest was four. And with every club emphasizing the importance of sleep, there will be no accommodating such early meal windows, and adjustments will have to be made.

"Generally our pregame meal is three hours 45 [minutes], three hours 30 [minutes] before the game," Real Salt Lake director of performance Matt Howley told ESPN. "For a 9 a.m. kickoff, we're looking at around 5:30 in the morning, so we'll probably push that closer to 6 a.m. and hope guys can tolerate it. They train off shorter windows than three hours 45 anyway, so it's not really a concern, it's more just having them understand and deal with that break in rhythm that they may have."

"We're actually relying more on our dietitian to make sure we're providing the guys the right nutrients with limited timing," Harty said. "Because if you were to give them that meal [at Sporting's normal pregame meal time], you're going to have them wake up at 5 a.m. and that sacrifices sleep, which we're not willing to do."

- Schedule, TV info: What you need to know about MLS is Back
- MLS is Back group standings

There's another complication that comes with a tight window to squeeze in a pregame meal, and that's the makeup of the meal itself. As the time between breakfast and kickoff dwindles, clubs will put a greater emphasis on carbohydrates for fuel rather than proteins and fats.

The Philadelphia Union, for example, would have an evolving menu ahead of Thursday's 9 a.m. game against New York City FC, a game the Union won 1-0 via a second-half strike by Alejandro Bedoya.

MLS is Back ready for kickoff despite FC Dallas exit: 'I think people feel really safe right now'MLS is Back Tournament viewer's guide: The matches, players and stories you can't afford to missEx-Timbers Gleeson: Team doctors 'took my life, my livelihood'

"We're going to leave the [breakfast] window open for guys so if they don't want to wake up right at 6 o'clock, they don't have to," Philadelphia performance director Garrison Draper told ESPN.

"What's going to happen is, as we're getting closer to kickoff, the types of foods that are available will change slightly so we can ensure the guys aren't eating the wrong things or putting the wrong proportions of food on their plate."

"A lot of discussion went on with the sports science department, with the dietitians, [about] what meals to serve just to get that right. Instead of having a specific time where we have a team meal together, we gave a kind of floating window of between [6] and 7:15 where they could get breakfast on their own, eat what they wanted and when they wanted specifically. There was a wide variety of food that usually you don't see in a pregame meal, I'll just put it that way. It was a unique experience for everybody."

But perhaps the greatest concern with morning matches isn't so much waking up early for them, but adjusting to them while simultaneously preparing for or recovering from the tournament's late games, scheduled for 10:30 p.m. ET throughout. RSL will play its two first games during MLS is Back's late window, and the players will then have four days to adjust their body clocks for their 9 a.m. match against Sporting.

No other club has such an extreme swing in scheduling.

"If you asked me personally if I'd rather have the morning slot or the 10:30 kickoff, no question I'd rather have the early game," Besler said. "I think the 10:30 game, what are you going to do all day? That's one of the worst things about game day as a player -- you have to sit around and you've got the game on your mind, you try to relax and try not to think about the game, but you've got so long.

"The other thing you've got to think about too is: You play the game at 10:30, you don't get done until after midnight, 12:30 or 1:00. You've gotta go back, you gotta shower, eat, you gotta wind down. You're not going to bed until, at a minimum, 2 or 3 a.m. So then the next day you're still recovering and probably even that second or third day, you're still trying to recover from that kickoff."

So Howley's challenge in adjusting from Salt Lake's 10:30 p.m. ET match against Minnesota United on July 17 (watch live on ESPN and ESPN Deportes) to its 9 a.m. ET start five days later against Sporting is one of the greatest in the tournament.

The key, he says, is adjusting the players' body clocks, just like they would if they were traveling cross country for a pair of matches on either coast. After its game against Minnesota, RSL will immediately jump into a full day of training with the hope of leaving players feeling ready for an early bedtime, beginning a cycle of preparation for the final match of the tournament.

Howley has encouraged players to develop bedtime routines to instill good habits and sleep hygiene, regardless of when they actually go to bed. He's given them guidelines on how to use light to help accelerate the body clock's adjustment.

"We need guys in bed by 9, 9:30 latest the night before. So ... after dinner, once you get back to your room, try to not use your phone that much, close your curtains, turn the lights off. That tends to promote the release of melatonin and starts to encourage the body to switch off and get prepared for sleep."

And then on the morning of matchday, it's all about "getting them access to light as early as possible. It doesn't really get light in Orlando until closer to 7, so when you're waking up at 5, turn every light on in your room, turn the TV on, get some blue light emitting, just to try to awaken the body as best as possible so it has the chance to feel like it's prepared."

Whether players' bodies will be prepared for such early starts -- particularly in Real Salt Lake's case -- we'll soon find out, but there's no question that the clubs' sports science staffs have been preparing for these unusual circumstances for some time.