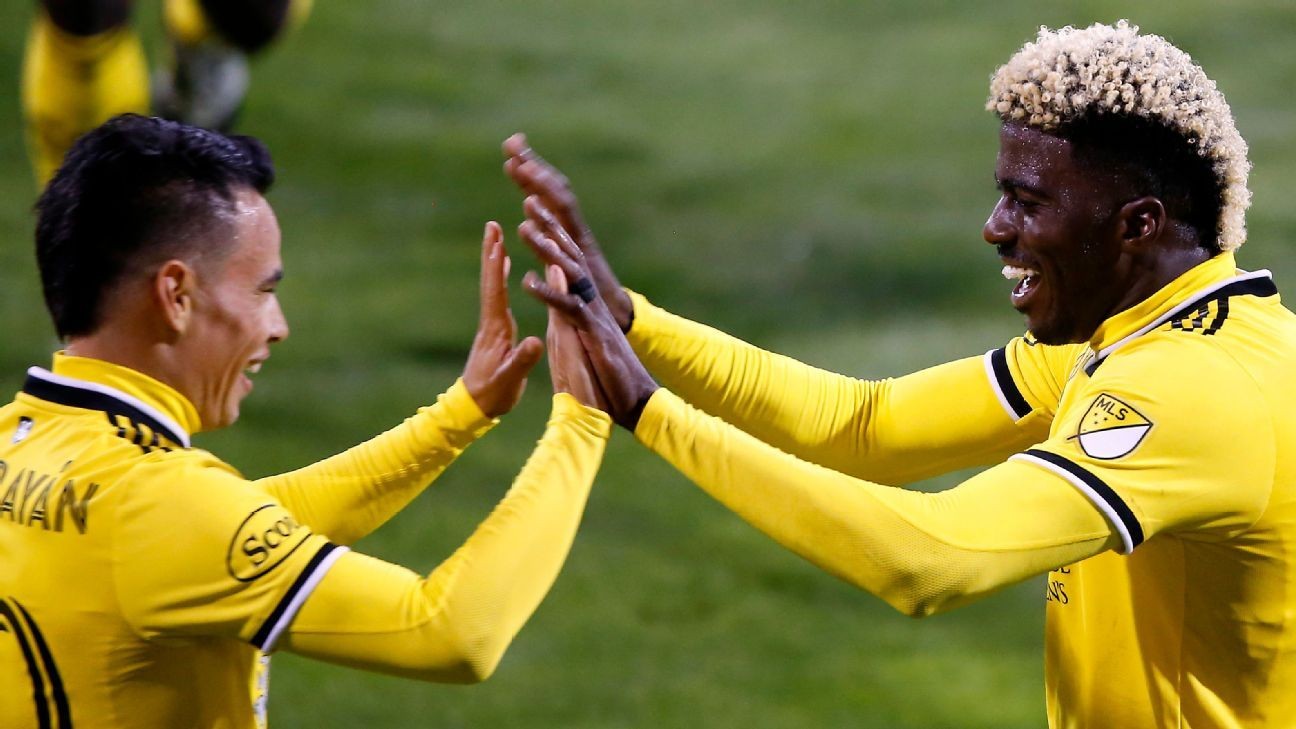 It's as you were in the top five of this week's edition of MLS Power Rankings, with Columbus winning for the third time in its past four contests to maintain its place on top of the heap. At the other end of the order, yet another pummeling has San Jose looking up at the rest of the league.

Gyasi Zardes continued his exceptional form in the 2-0 win over Nashville, scoring one and assisting on the other. He has four goals and a pair of assists in his past three appearances, and is second in MLS for goals scored, one behind LAFC's Diego Rossi.

The Union's only loss since MLS is Back came in a narrow defeat against Supporters' Shield leader Columbus, as Jim Curtin's side have amassed 16 points from seven matches, outscoring opponents 14-4 in that span.

The Sounders continue to chug along, dispatching LAFC 3-0. What will please manager Brian Schmetzer even more is how his side has solidified defensively, conceding six goals in its last six games.

Chris Mueller is the fourth-leading goal scorer in the league following his tally (and assist) in Orlando's 4-1 win over Chicago. The 24-year-old has made 11 appearances in 2020, only failing to register a goal or an assist in four of them.

A 2-2 draw against D.C. means Toronto has won once in four matches this month, falling five points behind Columbus in a Supporters' Shield race that the Reds were not long ago considered favorites for.

A 0-0 draw against New England was the second time in three games that NYCFC shared the points in a scoreless contest, but the Bronx side's defense has been peerless since leaving the MLS is Back bubble, allowing three goals against in seven contests.

Striker Franco Jara arrived in Dallas with some weighty expectations. After a slow start, the Argentine has caught fire with five goals in his past five games, and three wins on the trot have launched FCD up to third in the Western Conference.

The Timbers got the job done in San Jose, taking four points out of a possible six, even as manager Gio Savarese engaged in some considerable squad rotation.

A home defeat to Colorado took the shine off a four-game unbeaten streak.

Romell Quioto netted both of Montreal's goals this week, but he was sent off in the 4-1 defeat to Philadelphia and the Impact conceded three more goals in a midweek loss to Vancouver. Eleven goals against in the past three games doesn't make for pleasant reading.

Darwin Quintero looks to be stepping up following the sale of Alberth Elis as his cheeky chip helped atone for his penalty that was saved against former side Minnesota. But a three-game winning streak has now given way to a three-game winless streak.

play2:03Dynamo come back from 2-0 down to draw with Minnesota

Darwin Quintero sparks a Houston comeback in a 2-2 draw vs. Minnesota United. Watch MLS on ESPN+.

An inspired fight-back against Dallas -- in no small part due to the continued brilliant form of Johnny Russell -- turned into a brutal loss thanks to Graham Zusi's crucial gaffe. SKC are still in second place in the West, but one win in six has prevented them from breaking away from the chasing pack.

No one has taken more shots in MLS than Gustavo Bou and only Diego Rossi has put more shots on target than Bou, yet Teal Bunbury is the Revs' leading scorer with four goals on nearly a third of the shots. That should pretty well explain why only Nashville, the Red Bulls and Cincinnati have netted fewer times than New England.

In a bid to boost Minnesota's attack, the well-traveled Kei Kamara has joined the Loons. Goals weren't the issue over the weekend, however -- rather the team's inability to protect a two-goal lead in a disappointing 2-2 draw against Houston.

The Kamara trade means the Rapids are doubling down on youth. Time will tell if that will work, but goals from Cole Bassett and Jonathan Lewis in a 2-0 road win over the Galaxy made for some positive early returns.

Defending in transition has been an issue for LAFC all season. Now they're just gifting goals to the opposition, conceding two penalties in the 3-0 loss to Seattle. The upcoming schedule eases up a bit with matches against Vancouver and San Jose, but LAFC are no in position to take anything for granted.

The expansion side's four-game unbeaten run came to an end in a 2-0 loss to league-leading Columbus, but that stretch put Nashville on the verge of a playoff place in the East.

Juan Agudelo and Brek Shea scored early in the first half to put down Atlanta. Watch MLS on ESPN+.

Miami's acquisition of Gonzalo Higuain from Juventus has already sparked its forward corps, with Juan Aguedelo scoring his second goal of the season in a 2-1 win in Atlanta as he faces a fight for minutes with the Argentina striker soon to make his debut in South Beach.

After two wins in a week, the 'Caps are now inside the playoff places. Such is life in MLS. Fredy Montero has looked reborn too, not only scoring three goals in wins over Montreal and Real Salt Lake, but also linking up well with strike partner Lucas Cavallini.

Not much is going right for RSL, whether it's on or off the field. Sure, things can change quickly given the compact standings in the West, but a home loss to Vancouver doesn't bode well.

Vancouver secure a 2-1 win at RSL, despite a late comeback bid from the host with 10 men. Watch MLS on ESPN+.

After something of a Cinderella run to the round of 16 at MLS is Back, Cincinnati earned its first win since the Orlando bubble in a 1-0 win at the Red Bulls, and still finds itself just two points out of a playoff place.

The Red Bulls were shut out for the third time in four games in their 1-0 loss at home vs. Cincinnati. Only D.C., Cincinnati and Chicago have a worse goal differential in the Eastern Conference.

Griffin Yow is the hero for D.C. United in a 2-2 draw with Toronto FC. Watch MLS on ESPN+.

Robert Beric scored in a second straight game as the Fire fell 4-1 to Orlando, accounting for half of Chicago's goals scored in four September contests.

Since getting the "new manager bounce" with a win over Nashville on Aug. 22, Stephen Glass' Atlanta has picked up just two points and lost four of six, including Saturday's 2-1 defeat to Miami

Each passing week heaps more humiliation on this team. A 6-1 home defeat to Portland was the latest indignity. GM Jesse Fioranelli said San Jose can't be hasty. He's had four years to build a team, there's no reason to think additional time will change its fortunes.