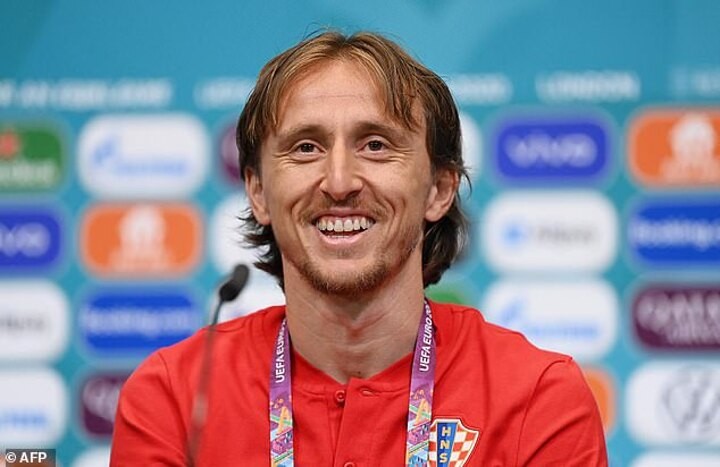 Luka Modric claims 'journalists and commentators' are arrogant regarding England's chances of winning Euro 2020 this summer ahead of Croatia's tie with the Three Lions.

Gareth Southgate's side have been billed as one of the favourites to win the summer tournament along with France, with most of England's matches should they reach the July 11 final being played at Wembley.

Croatia star Modric claims the English media are showing signs of overconfidence ahead of their opening match at Wembley this Sunday, whilst insisting that he does not think Southgate or the Three Lions players show those characteristics.

The 35-year-old said: 'That arrogance is not so much related to the players but the people around them, some of the journalists and the commentators.

'I haven't really been following their media lately because we only want to deal with football.'

England received plaudits at the 2018 World Cup as Southgate fired them to a first semi-final in the competition since 1990 - but the Three Lions lost their last four tie to Modric's Croatia 2-1 after extra-time.

Since the semi-final disappointment in Russia, Southgate has managed to add more young talent to the side, including Phil Foden, Mason Mount and Declan Rice.

Despite claiming there is an arrogance in England about their national team, Modric confirmed England's status as one of the favourites to win the tournament - especially considering their home advantage in some fixtures.

The Real Madrid star added: 'For me, they are better than they were three years ago, for sure, no doubt.

'(Their) main threats? To say one player is difficult because they have so many great players, talented players, young players that are hungry for success.

'They will be very dangerous at this Euros and for me they are one of the favourites. Especially that they are playing at home which is also a good part for them.

'(It is an) advantage, not a huge one but it is because there will not be away fans and that's why I think they are certainly one of the favourites.'

Croatia and England will compete in Group D along with Scotland and the Czech Republic, with the matches taking place at Wembley and Glasgow's Hampden Park.