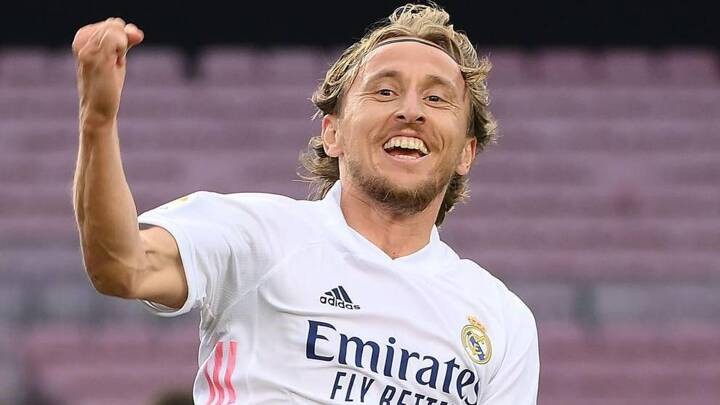 Real Madrid must decide this season on the future of two of their most symbolic players: Sergio Ramos and Luka Modric. Without them, the scoreline at Camp Nou on Saturday could have looked very different.

After the game, the Croatian was welcomed onto the team plane by club president Florentino Perez with a shirt commemorating his 350 games for the club.

Modric's display against Barcelona showed that when he is at his best, being rested and taken care of, there is no one quite like him, and it would be a mistake to allow him to leave for free when his contract ends in June.

In an interview with Four Four Two, the 35-year-old recently said that he was happy in Madrid and that he would like to stay at the Estadio Santiago Bernabeu, but that he would make the best decision for all parties.

Modric, as MARCA have previously stated, is happy to reduce his wages to stay in Madrid as he wishes to hang up his boots as a Real Madrid player.

With his contract up in the summer, he can negotiate with any club from January 1, but his preference is to give Real Madrid priority treatment.

"I still have this year left with Real Madrid and after we'll see what happens, I feel good and I want to keep playing football for another year," Modric said.

"Where? We'll see, to be honest, I haven't thought about it much.

"I'm focused on Real Madrid and what we can achieve this season, it's my only objective, then I'll sit down with the board and we'll find an adequate solution for everyone.

"I've been here for eight seasons, eight magnificent seasons and I've formed a great relationship with everyone at the club, whatever happens, there won't be a problem."

Whether he is a starter or a substitute, the Clasico once again showed that Modric has the talent which once made him a Balon d'Or winner and an undisputed starter for Zinedine Zidane.

Now, at the age of 35, it is normal that there are doubts but Modric clearly wants to wait until the end of the season to decide what will be his last contract in football, and he hopes will be in the white of Real Madrid.