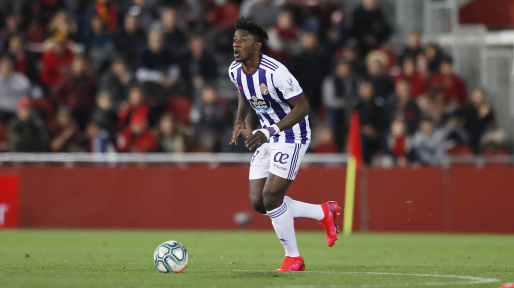 Ghanaian defender Mohammed Salisu is among ten players to have enjoyed more minutes on the pitch in La Liga before the break due to the spread of the Coronavirus.

The 20-year old center back is having an outstanding season after earning promotion to the senior side of Real Valladolid at the start of the campaign.

However, the swashbuckling defender is ahead of Saul of Atletico Madrid, Raul Albiol of Villarreal, Pervis Estupiñán of Osasuna, Iago Aspas of Celta Vigo, Marc Cucurella of Getafe and José Campaña of Levante.

Mohammed Salisu's performances this season has seen him attract interest from European giants Real Madrid as well as English side Manchester United.

He was also named in Ghana's AFCON 2021 qualifiers squad for the game against South Africa and Sao Tome before he picked up an injury, which ruled him out of both fixtures.