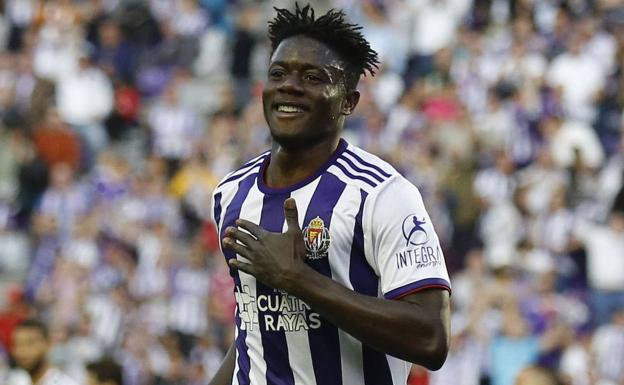 Among the new stars of the LaLiga defense, is the central Mohammed Salisu of Real Valladolid, whose solid and balanced work in his debut season suggests that he has a long and successful career ahead of him.

The 20-year-old Ghanaian central defender from Valladolid has been one of the most impressive defenders among LaLiga Santander clubs in the 2019/20 season, overcoming personal battles with brilliant and veteran forwards like Álvaro Morata of Atlético de Madrid, Willian José de Real Sociedad and Borja Iglesias from Real Betis.

After debuting in LaLiga Santander last August , Salisu has started in 26 of Valladolid's first 27 games, forming part of a solid defense that has been key for Sergio Fernández's team to have spent most of the season away from the drop zone.

Born in Accra in 1999, Salisu was signed by Valladolid in the autumn of 2017 , after being recruited by the 'African Talent Football Academy' in his country.

By the following January, the 17-year-old had already broken into Valladolid's B team in the third category, impressing enough to become a starter for the rest of the season.

In 2018/19, Salisu regularly trained on weekdays with Sergio's first team players, while playing league games with team B and Copa del Rey games with the first team.

The opening day of the 2019/20 marked his debut in Laliga Santander, where he played a key role as the Valladolid started the season with a win 2-1 against Real Betis.

The following weekend, the 1-1 draw at Real Madrid's Santiago Bernabéu proved that Salisu and his teammates could compete with anyone in LaLiga Santander.

Over the following weeks and months, Salisu placed himself at the center of Valladolid's defense alongside seasoned Kiko Olivas , and the pair's strength and reliability was key to achieving a streak of six games without scoring in 10 LaLiga matches .

The 33 goals scored in LaLiga's first 27 games are actually fewer than a team has received in the bottom half of the table.

The individual numbers support the good impression made by Salisu, quick on the ground and comfortable with the ball at his feet with his 1.80 meters tall and 82 kilos.

He is 81% successful in passing , and few defenders, young or old, have enough discipline to receive just two yellow cards throughout the season.

Most notably, no LaLiga player has done more than his 136 punches so far. His first goal in LaLiga in a 2-0 home win against Eibar in October was from just a couple of meters from the net, but he scored three vital points. In early January, he stepped forward to provide the pass that center forward Enes Unal transformed for a crucial draw in the final 2-2 minutes at home against Leganes.