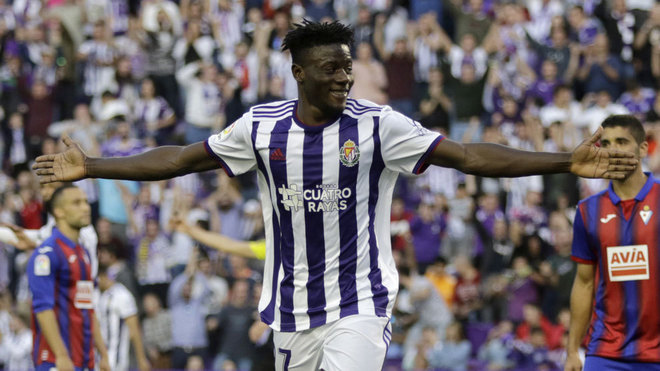 It’s always great to see young footballers from Ghana starting to make their way into the professional ranks – especially in one of the world’s most prestigious leagues.

Born in Accra, Mohammed Salisu is doing just that with Real Valladolid in La Liga, and in quite some style. The Ghanaian center-back burst onto the scene at the start of this season at the age of 20-years-old. He immediately commanded a starting XI place on the team.

Due to his age and lack of experience, Modern Ghana reports that many doubted manager Sergio González’s decision to give Salisu such a high-profile role, but he’s more than delivered with solid and consistent performances.

Standing just over 6’2’’, Salisu featured in every single one of Real Valladolid’s first 26 games of the season, starting in 25 of them. He’s even been able to contribute at the attacking end of the pitch, notching a goal and an assist already.

Salisu’s performances have not gone unnoticed across the major European leagues, with a long line of suitors preparing to launch bids in the summer. Valladolid would, of course, want to keep the player that’s worked their way up through the ranks of the club, but they haven’t given themselves much of a bargaining position.

Valladolid will struggle to keep Salisu

The biggest problem facing Valladolid concerning their, perhaps unexpectedly, valuable defender is that his current contract includes a rather measly €12 million release clause. While it does run until the end of the 2021/22 season, it’s very difficult to see any team that admires Salisu not paying up.

Another issue facing the club is that they’re very much in the midst of a relegation battle. Sitting just seven points above the drop by their 25th game, it’s possible that Valladolid won’t be in the top-flight of Spanish football next season. Even if they survive the drop, a young player could be easily persuaded to jump ship and join a team contending for trophies.

Salisu looks to have a big decision ahead

The leading name said to have been scouting and are subsequently interested in signing Salisu is Manchester United. The once-dominant Premier League club is in need of a capable center-back to partner Harry Maguire, and they might be in the Champions League next season.

On Space Casino betting on football, the Red Devils are just behind Inter Milan at 6/1 to win the Europa League. Winning the competition would give United a place in the Champions League. That said, they’re also in the running for a top-four place in the Premier League, at 11/4.

Along with Manchester United, fellow Premier League outfit Southampton have been monitoring the Salisu situation. While not the biggest club in the world, the Saints certainly have a knack of developing top-class defenders, with Virgil van Dijk being their most recent big export.

United also face competition from clubs who have faced Salisu in La Liga, according to the paper Marca. Lauded for the defensive capabilities of the team, the Ghanaian center-back will be honored to have been mentioned as a transfer target of Diego Simeone’s Atlético Madrid. As is the case for Southampton and Manchester United, triggering the release clause will not be a problem for Atlético.

He may not have featured along the backline for the Black Stars yet, but greatness appears to be just on the horizon for Mohammed Salisu, especially given the big-name clubs seeking his signature.