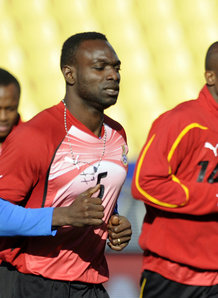 The number of clubs chasing John Mensah grows by the day as French giants Monaco are the latest to join the race to capture him permanently.

According to Le Parisien, Monaco have approached his club Lyon with on offer to ensure that the Ghanaian does not return to England

The centre-back is contracted to Olympique Lyonnais but spent the duration of last season on loan with Sunderland in the English Premier League.

Some clubs in Qatar, Turkey and Italy have approached Lyon Â with an offer by the French club are also keen on convincing him to stay.

But Mensah seems keen on playing for Sunderland as he seems to have enjoyed his stay in the country.

In mid-June it emerged that the Black Cats were unsure whether to exercise their buy-out clause for the player, and manager Steve Bruce has yet to take any action, indicating that a move back to France is likely for the player.

"There has been an offer for John from a club in France," agent Fabien Pivateau toldÂ The Journal in June without indicating the identity of the outfit.

Les Monegasques have now been linked with the former Stade Rennais centre-back, whose major problem during his career has been the frequency with which he has acquired injuries.

Monaco lost the services of Sebastien Puygrenier to Zenit St. Petersburg in the summer after their loan agreement with the Russian club expired, and the Stade Louis II side now have a big hole to plug in the centre of their rearguard.

A further worry for the principality side is the future of Nene, who has been strongly linked to Paris Saint-Germain.

During a friendly against Clermont on Tuesday, the Brazilian player was dismissed with seven minutes remaining, perhaps a symptom of his discontent in the south of France.