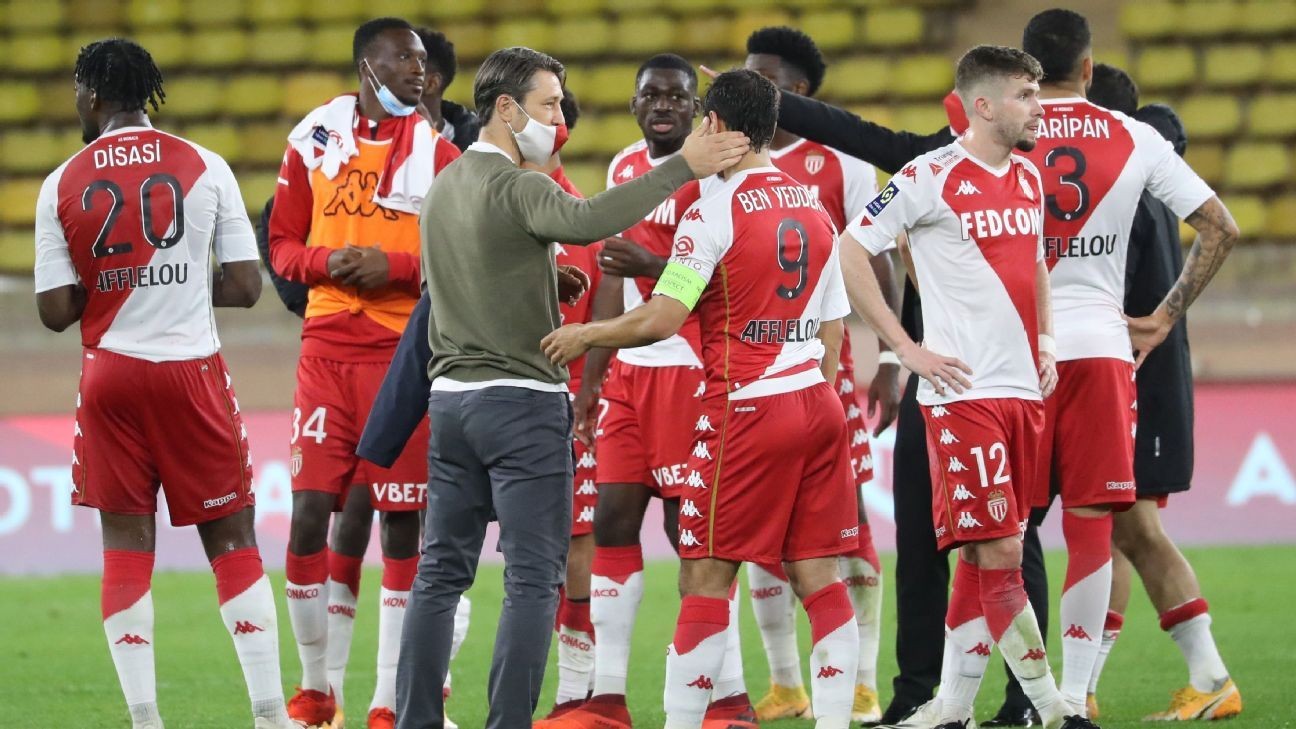 Niko Kovac has taken Monaco from midtable to title contenders in less than a full season in charge. VALERY HACHE/AFP via Getty Images

With 11 games to go between now and the end of the season, plenty of things can -- and will -- happen for AS Monaco and manager Niko Kovac. There are three possible outcomes for this campaign: the title, a top-three finish or fourth place. Nothing else.

Whatever the end result is, this season is already a success. Even a fourth-place finish would be much better than anything they'd projected in August. At the time, the club from the Principality had changed managers again, sacking Robert Moreno and hiring Kovac, the former Bayern Munich man. The club hired another new sporting director in Paul Mitchell, too.

It's been three mad years since the 2017 title that Leonardo Jardim and his golden generation clinched, after which Monaco destroyed pretty much everything they had built.

Monaco were superb that season -- 95 points, eight ahead of PSG, and 30 wins from 38 games, with 107 goals scored in Ligue 1 -- and with the added pride of succeeding with talent they'd developed in the club, from Kylian Mbappe to Fabinho, Bernardo Silva, Thomas Lemar and Benjamin Mendy. Jardim had done a superb job making them French champions and Champion League semifinalists, though all the cornerstone players of that remarkable rise were sold for huge amounts. Yet the club and Jardim were not ready for a new cycle, and the fall was as brutal and deep than the rise was sudden and beautiful. However, there is a feeling that another golden generation could be coming through this year.

Back in August, before the 2020-21 season, the goal at Monaco was all about rebuilding, but the results and the progress of the team have gone well beyond expectations. Kovac and his players are fourth in the table, one point behind Lyon, two behind Paris Saint-Germain and four behind Lille. They travel to Strasbourg on Wednesday before hosting the leaders in 10 days' time.

The fact that Kovac is refusing to talk about the title for now is not a surprise. It's better at the moment to be the dark horse in this unexpected and fascinating title race. Not only does it reduce the pressure around the club, but it's also a realistic way of handling the fact that the rebuild is ahead of schedule. This latest Monaco project is all very new and, in a way, fragile. Kovac, his staff and Mitchell have not even been there a year. Everything has changed.

For a start, there's the disciplined environment Kovac has cultivated. Rules are rules: whether it's schedules, phones, food, weight, he runs his squad with almost military precision. But the players accept it. The old guard -- 33-year-old Cesc Fabregas, 30-year-old Wissam Ben Yedder and 31-year-old Stevan Jovetic -- lead by example. Kevin Volland, the Germany striker who arrived from Bayer Leverkusen in the summer and fits perfectly within this new philosophy, is a great transmitter of Kovac's principles on the pitch and in the dressing room.

The manager is fair and honest in his coaching, too. He talks to his players, tells them when something is good or bad, and why. Communication is good, sources tell ESPN. There is transparency and accountability. Kovac likes putting his arm around a player when needed, and has a warm personality despite looking cold from the outside. But make no mistake: when he isn't happy, he's not afraid of shouting at his players.

Kovac is demanding, whether in training or games. Everyone has to work hard and be focused at all times. He doesn't want the intensity and effort of his players to drop.

"He is very rigorous. He always wants us to be at 100%," explains defender Benoit Badiashile, a key player in the Kovac revolution. "Even when we win 3-0, he can shout [at] us. But he is not a dictator. He knows we can make mistakes."

The manager has the respect of the players. Fabregas has accepted his role of super-sub. Ben Yedder doesn't like that he is often subbed off, but the captain has accepted it too.

However, the biggest difference is certainly on the pitch. Kovac only sees football with high intensity, and the training sessions reflect it. The players have never worked harder or run as much. The Croatian manager also installed a very precise tactical structure, requiring is a lot of attention in training. The formation has changed some recently, with a 3-4-3 and build-up in a 3-2-5, demonstrating the flexibility they work so hard at in training. Kovac is very meticulous, and deserves credit for how much young players have improved: Sofiane Diop (20), Aurelien Tchouameni (21) and Youssouf Fofana (22) have been fantastic, on another level.

Diop is a skillful, creative and quick attacking midfielder who gives so much to the team. Defensive midfielder Tchouaméni has been bossing games in midfield all season and should end the campaign in Ligue 1 Best XI lists.. Fofana partners him in midfield and without being as impressive, he has been so important to Monaco too.

All of them are followed by big European clubs. As reported by ESPN, Chelsea are huge admirers of Tchouaméni while Diop and Fofana have been scouted by Spanish, German and English clubs too.

The first phase of "a long project," as one source puts it to ESPN, has been a great success. The relationship between Mitchell, 39, the former RB Leipzig head of scouting and Kovac, 49, has been idyllic. Even when Monaco lost three games in a row in December (Lens, Marseille, Lille), there was no panic. The club and the owner, Russian billionaire Dmitry Rybolovlev, know that they need stability after the chaos of the past few seasons.

"We need more time, but we are on the right path," Kovac said last month. He's made mistakes, at Lyon earlier in the season for example, when Monaco lost 4-1 after being picked apart tactically by their hosts. The defensive weaknesses the team showed seem to have disappeared. They were very solid at the Parc des Princes last month in a 2-0 win over PSG to complete the double over the champions. They have been pretty unplayable since mid-December, with 11 wins and two draws in their past 13 games in all competitions.

Even if PSG are still the (slight) favourites to win this title, a lot of people in France believe that Monaco have been the better side all season.

"They are really impressing me at the moment. They have been exceptional since January," Lille manager Christophe Galtier said on Tuesday. "I think they are superior to the other three teams (Lille, PSG and Lyon). It doesn't mean that they will be champions, but they are better."

Mind games have started, because Monaco are feared. They finished ninth last season under Moreno, missing out on European competition, which was actually a good thing for Kovac's rebuild. They know that they will better that easily this season, by how much won't be known until its conclusion on May 23.