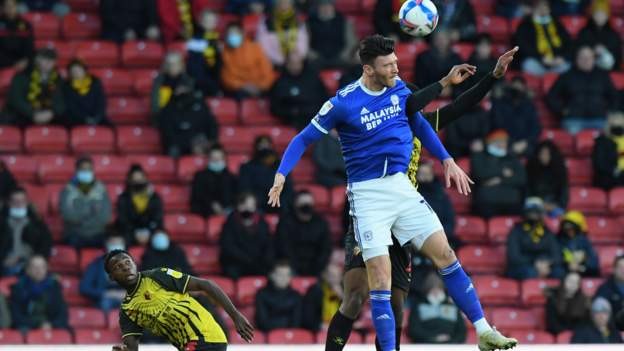 Moore's smart first-half volley as Watford failed to clear a corner gave the Bluebirds a deserved lead as they won for a third match in succession.

The hosts responded in the second half and dominated, but Cardiff held firm.

The victory, Cardiff's first on the road this term, sees them rise to 11th in the Championship while the hosts slip to seventh, outside the play-offs.

Both sides were playing in front of supporters for the first time in 10 months with the home faithful making themselves heard and clearly revelling in their return to Vicarage Road.

A week ago it would have seemed an ideal time to play the Bluebirds, especially as Watford have won their past three league matches against Cardiff, most recently during the 2018-19 Premier League season when they did the double over their opponents.

Watford came into this contest with the best home record in the Championship, but an unchanged Cardiff team were no doubt buoyed by heavy home wins over Luton and Huddersfield that have lifted the pressure on manager Neil Harris.

Indeed it was the visitors who started the brighter side, with Harry Wilson seeing an effort blocked and Joe Ralls curling his shot off target inside the opening 15 minutes.

The hosts responded through Joao Pedro's effort that flashed right across Alex Smithies' goal before Cardiff again threatened with a counter-attack, but the in-form Moore headed over.

Moore was a constant cause for concern for the Hornets and his header was saved by Ben Foster.

Cardiff were the slightly more threatening side in a first half of few chances and they thought Mark Harris was going to have a sight of goal on 36 minutes, but William Troost-Ekong repelled the danger, before captain Sean Morrison headed narrowly wide.

However, Cardiff's pressure eventually told when Moore swept home. Watford failed to clear a corner and the ball fell perfectly for the Wales striker, who volleyed home with his left foot from close to the penalty spot.

After the break Cardiff almost doubled their lead through Joe Bennett's inviting cross, but Ken Sema just denied Harry Wilson at the back post.

The Hornets' intensity increased as they attempted to avoid a first home defeat and they spurned a golden opportunity to level midway through the second half, but Domingos Quina was denied when clean through by an outstanding save from Smithies.

The Bluebirds goalkeeper was again called into action to save Pedro's headed chance with Ismaila Sarr constantly stretching and threatening their defence.

Ralls fired over as Watford pushed frantically for an equaliser and left space in behind while Stipe Perica was booked for simulation in the final moments as the hosts screamed for a penalty.

Time was against Watford, who missed a golden chance in injury time as Perica headed over from five yards with almost the last touch of the game.

"It's not good. Especially because of our fans who have been with us for the first time after a long period. We didn't do our job in the way how we wanted.

"We didn't start good and it's not first time. If I compare now the first and second half there is a big difference. We need to start from the first second of the game to have passion, to work hard, to fight but it's not looking like that, especially in the first 45 minutes.

"After that we we pushed our opponent, we tried. Our problem is our game because if we played the first 45 minutes like we did the second, and we lost the game, we don't have some something to tell.

"It's not a good result. No one from us is happy because of what's happened. We now need to think about next one now and to recover the players and to fight for the next three points."

"I thought Luton last week was a huge performance because of the scrutiny, Huddersfield was even bigger... but to come here and perform like we did in the first half and hold on, it's a big result... probably one of my most enjoyable in charge.

"We have won three on the spin and found that clean sheet mentality and look like we have lots of ways to score a goal.

"It was a great boost having fans here and I am really pleased for them, it was nice to play in a stadium with some atmosphere. Having seen the noise 2000 fans can make, it would be great to have fans back at the Cardiff City Stadium."

Attempt missed. Stipe Perica (Watford) header from the centre of the box is too high. Assisted by Ismaila Sarr with a cross.

Attempt missed. Domingos Quina (Watford) right footed shot from a difficult angle and long range on the left is high and wide to the right from a direct free kick.

Stipe Perica (Watford) has gone down, but the referee deems it simulation.

Attempt missed. Will Hughes (Watford) left footed shot from the right side of the box is close, but misses to the right following a corner.

Attempt missed. Joe Ralls (Cardiff City) right footed shot from the right side of the box is high and wide to the right. Assisted by Kieffer Moore with a headed pass.