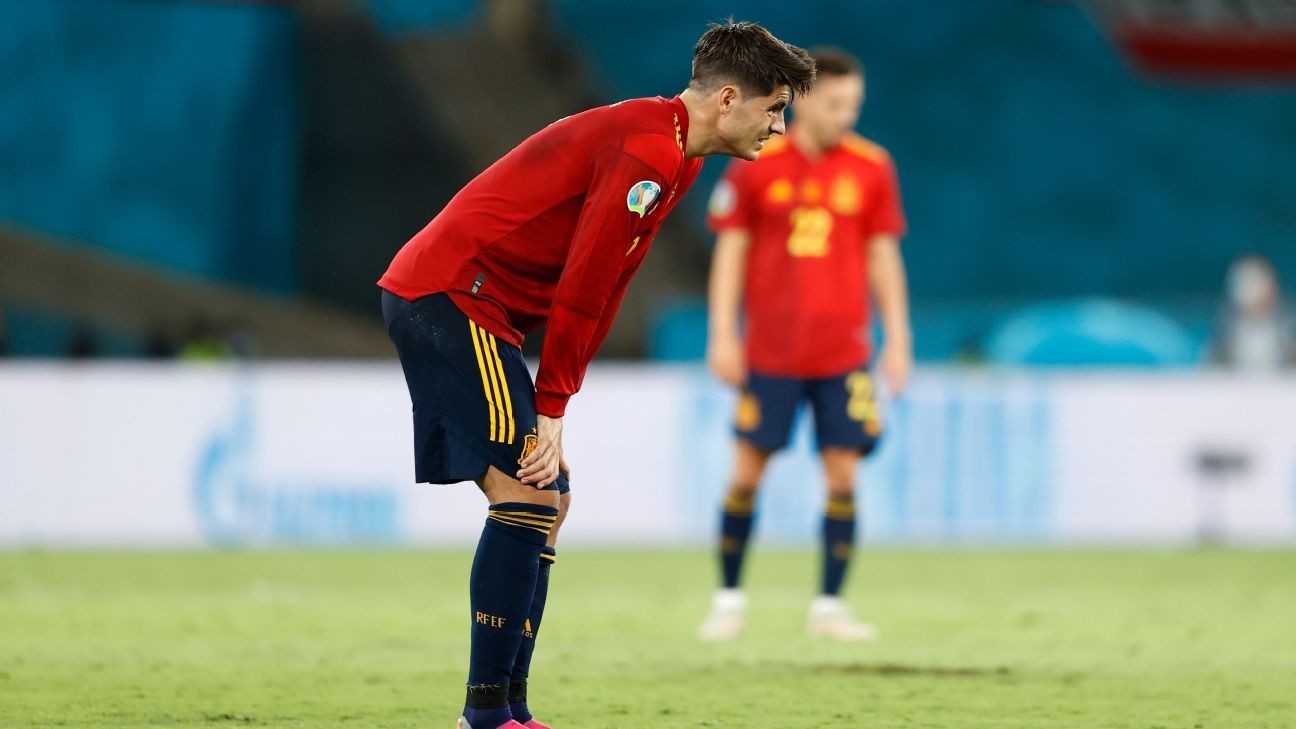 Spain forward Alvaro Morata has revealed that his family have received "threats and insults" from fans over his performances at Euro 2020.

The Juventus striker has endured a difficult start to the tournament and was whistled by a section of the home crowd at Seville's La Cartuja stadium after missing a chance in Spain's opening 0-0 draw with Sweden.

He scored the only goal in a 1-1 draw with Poland, before missing another opportunity after strike partner Gerard Moreno's penalty hit the post -- and then failed to score with a spot kick himself in a 5-0 win over Slovakia on Wednesday.

"I understand I get criticism for not scoring goals. I'm the first to know and accept it," Morata told Cadena COPE on Thursday. "I wish people would put themselves in the position of seeing what it is to receiving threats and insults to your family, 'I hope your children die,' [this week] I had to put my phone away.

"[Memes] don't bother me, but what annoys me is what my wife has to go through," he added. "My kids go to Seville with their dad's name on their shirts. Yes [they've had things said to them]. I understand criticism for not doing my job well. But there's a limit."

Spain will play Croatia on Monday in Copenhagen in the round of 16. Coach Luis Enrique has consistently defended Morata, pledging to stick with him. The 28-year-old has scored 20 goals for Spain in 43 appearances.

Luis Enrique favourably compared the forward's goalscoring record with many of his contemporaries before the Poland match. He said: "Morata and 10 more" would start.

Morata responded by scoring and celebrated by running to celebrate with the coach.

"[I] didn't sleep for nine hours after the [Poland] game," Morata said. "I was angry because I had a chance and Spain couldn't win.

"I wish people would put themselves in other people's position. People whistle me because it's what they hear. Others incite it."

Morata went into Euro 2020 already under pressure after some fans sang: "Morata, how bad you are," following a missed chance during Spain's last pre-tournament friendly, a 0-0 draw with Portugal at Atletico Madrid's Wanda Metropolitano stadium.

The forward has previously said he "stopped enjoying football" and "had a bad time" while at Chelsea from 2017 to 2019.

Juventus confirmed earlier this month that Morata will spend another season on loan from Atletico next year, after scoring 11 goals in Serie A last campaign.