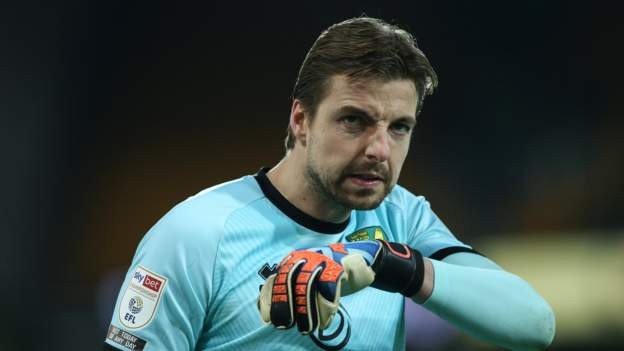 More than 100 positive Covid-19 cases have been recorded after tests were carried out among players and staff at 66 English Football League clubs.

A total of 112 individuals were positive out of the 3,507 players and club staff tested this week.

Brentford head coach Thomas Frank has been named as one of their two cases.

All those who have tested positive will self-isolate for 10 days under EFL and government regulations.

Clubs playing in the FA Cup third round were all tested along with a number of others.

The remaining six EFL clubs will be tested before their next league fixture, with twice-weekly testing also starting next week.

Championship clubs Derby County, Middlesbrough and Sheffield Wednesday have all reported Covid-19 outbreaks in the past week, while a record 40 individuals also tested positive in the Premier League's latest set of results.

League One Shrewsbury Town have had to postpone their FA Cup third-round tie against Southampton, with two fixtures in the Women's Super League also called off this weekend.

Derby will fulfil their FA Cup tie against non-league Chorley with players from their under-23 and under-18 squads, while interim manager Wayne Rooney and the rest of the first-team squad miss the game.

Medical advisers for the EFL remain confident its protocols are "continuing to mitigate against the spread of infection" amid low numbers of positive results among the majority of those tested.

"Today's results reflect the current speed at which the virus is spreading amid the emergence of a new variant of Covid-19," said doctors Richard Higgins and Subhashis Basu,

"The protocols, supported by the clubs and government, are allowing us to continue playing fixtures as scheduled.

"But we cannot be complacent, which is why recently enhanced matchday and non-matchday protocols have been issued to underpin the reintroduction of a league-wide testing programme.

"Medical advice continues to support that following these protocols is the most successful route to mitigating against the spread of infection."

Brentford boss Frank - the Championship Manager of the Month for December - was tested on Thursday, two days after his side's EFL Cup semi-final against Tottenham.

He will miss their FA Cup third-round tie against Middlesbrough on Saturday, with B team head coach Neil MacFarlane taking charge in his absence.

Reacting to the news of three cases at Norwich, manager Daniel Farke promised his players and staff will continue to remain vigilant in the weeks ahead.

"We want our training ground to be one safest places in the country," he said. "We will still be very careful and follow our guidelines."