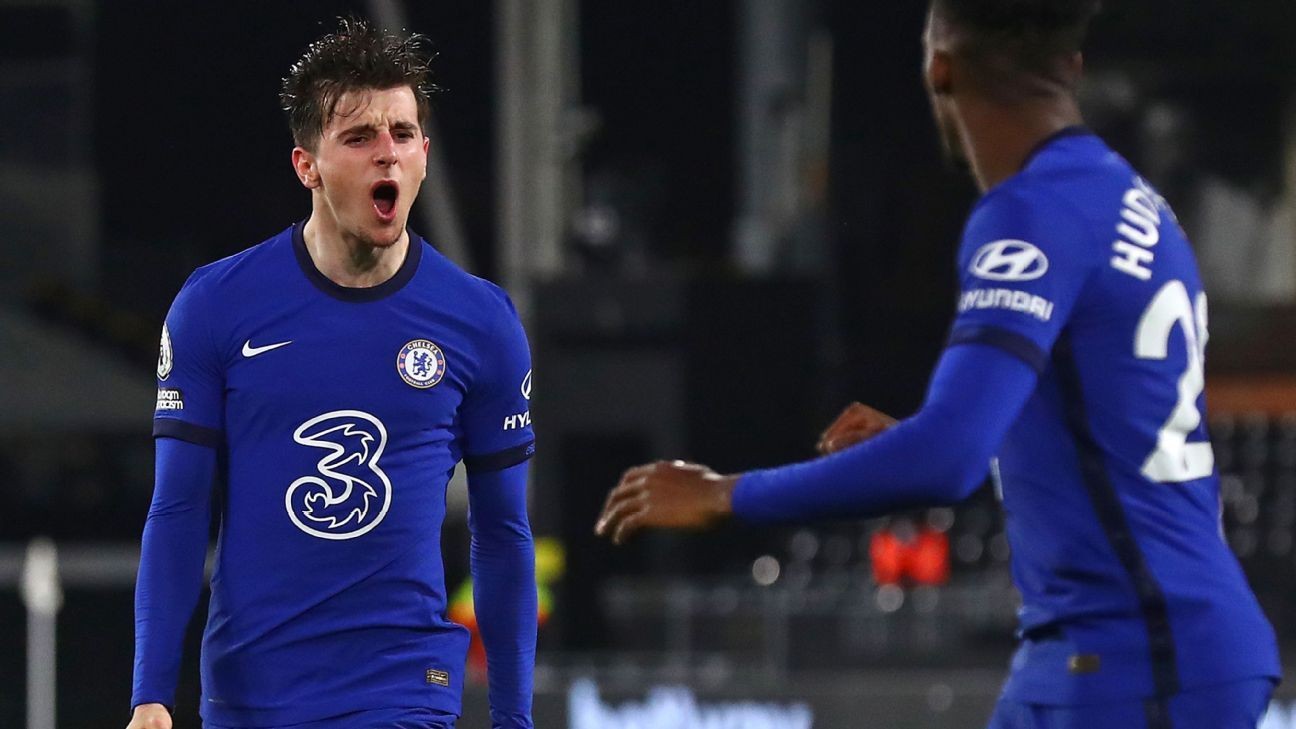 LONDON -- It is fitting that the man Frank Lampard has trusted arguably more than any other came to the Chelsea head coach's rescue in his hour of need.

The Blues were labouring towards a stalemate at Craven Cottage despite holding a numerical advantage for the entire second half after Antonee Robinson was sent off for a wild tackle on Cesar Azpilicueta a minute before the interval. Despite a full compliment of expensively assembled forwards being available, Chelsea were struggling badly to break down a spirited Fulham side resolutely digging in for a draw when Ben Chilwell swung over an innocuous-looking cross with 12 minutes remaining. Fulham goalkeeper Alphonse Areola clawed the ball away unconvincingly and it fell to Mason Mount, who steadied himself before rifling a low shot into the net to hand the visitors a precious 1-0 win, their first in the Premier League since Dec. 21.

It was Mount's first League goal since Sept. 26 and reward for the player who showed the most endeavour, registered a total of seven key passes and accounted for eight crosses, more than any other player on the pitch.

Lampard had been shuffling the pack in search of a winning hand during the second half, throwing on Tammy Abraham, Timo Werner and Callum Hudson-Odoi in an increasingly desperate search for answers. Hakim Ziyech had been hailed in the build-up as a key creative influence but here he gave the ball away 22 times, the most of any player.

And in the end it was the homegrown boy, whose place in the team has often been questioned, who came up with match-winning moment. Lampard took great delight in the identity of the goal scorer, having defended him stoutly this season from criticism on social media from some Chelsea supporters questioning whether he possesses the requisite quality to play so often in a team trying to win the title. In fact, it was only five days ago that Lampard said Mount "can, should and will" score more goals.

"I thought he was outstanding," the manager said of his midfielder postgame. "He has been for us this season and last. He is maturing all the time. He is still young, he just turned 22 last week. His general play was great and his finish he deserves. He cares about this club, he wants to be a top player for Chelsea and I'm really happy to have him."

Chelsea had exerted a degree of second-half pressure, but their 70% of possession resulted in few scoring opportunities.

Lampard highlighted in the build-up to this game that the Blues finally had two clear weeks to work on the training ground either side of a facile FA Cup third-round victory over Morecambe. Perhaps the most damning indictment of the 42-year-old came in the fact that it didn't really show.

When Frank Lampard was desperate for a result, protege Mason Mount delivered Chelsea a win. CLIVE ROSE/POOL/AFP via Getty Images

Chelsea missed the delivery from out wide of Reece James and perhaps the aerial threat of Kurt Zouma from corners, rotated here in favour of Antonio Rudiger, and it was an even contest prior to Robinson's dismissal. Although Mount hit the crossbar midway through the half, Fulham had the best chance: Ivan Cavaleiro, who scored the equaliser in Wednesday's 1-1 draw at Tottenham Hotspur, fired wide when Kenny Tete found him unmarked in the box 12 yards out.

Robinson's tackle on Azpilicueta came just three minutes later, and although he was only fractionally late and not particularly high, it was an overzealous tackle with excessive force that convinced referee Peter Bankes to make a decision VAR did not feel sufficiently concerned with to overturn. Fulham stuck at the task resolutely thereafter and it should be remembered that Leicester City, Liverpool and Spurs have struggled to beat a team reinvigorated by several new signings and a change in approach orchestrated by Scott Parker.

In the end, perhaps fatigue was a factor. Fulham had 48 hours' notice to organise a team to face Spurs as postponements due to COVID-19 wreaked havoc with the schedule. The knock-on effect was exacerbated by going down to 10 men.

"It is an important win for us," Lampard said. "It is just three points in the grand scheme of things but because we have had some results we don't like recently, it was important for us. It keeps us towards the top four but we must carry it on. I don't want to get too excited with one win but it is important for the confidence."

Lampard will feel relieved Chelsea found a winner, but there was still time for Werner to remind everyone of the horrible rut he is in, bursting clear in stoppage time but sidefooting hopelessly wide. His last league goal came on Nov. 7. Kai Havertz, Chelsea's most expensive summer signing accounting for £71 million of their £220m outlay, remained an unused substitute.

Chelsea will collectively have to improve at Leicester on Tuesday. Perhaps some of that training-ground work will pay off then.