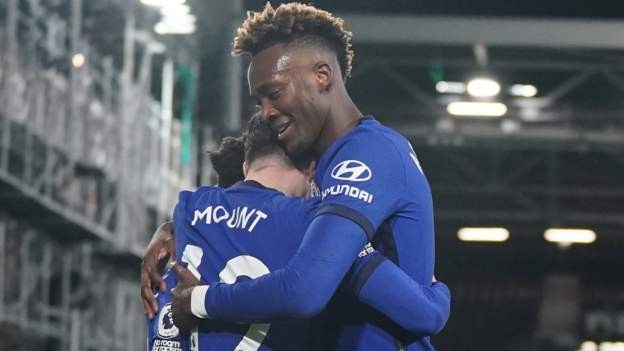 Mason Mount finally broke the resistance of 10-man Fulham as Chelsea laboured their way to only a second Premier League win in seven games.

Antonee Robinson was sent off late in the first half for Fulham for a dangerous tackle on Cesar Azpilicueta.

Ten different players had shots for Chelsea, but they were wasteful in front of goal.

Their biggest chance before the goal was when Mount crashed a shot off the crossbar.

The England midfielder eventually proved the match-winner with a half-volley after Alphonse Areola flapped at Ben Chilwell's cross.

The win takes Chelsea up to seventh, while Fulham - who had drawn their previous five league games - are four points from safety.

Follow reaction plus the rest of Saturday's Premier League action

Chelsea went top of the table on 5 December when they beat Leeds. This was only their second victory in the league since then - and they sit seven points off Manchester United, having played an extra game.

Boss Frank Lampard talked about "the experience and personality of" Olivier Giroud and Antonio Rudiger when explaining their places in starting XI - and spoke of the need to "kick-start" their season.

The result came eventually, albeit not with a stellar performance.

Giroud and Chilwell both missed the target with volleys, while Hakim Ziyech had a shot well saved before Mount hit the bar.

Rudiger had a header tipped wide, Ziyech went close with a shot from the left wing and Giroud flicked an effort wide at the near post.

It looked as if the goal was never going to come before Mount finally converted with a well-hit low finish.

Substitute Timo Werner had a glorious chance to end his Premier League goal drought - going back to 7 November - late on but slotted wide at the end of a counter-attack.

Robinson's dismissal came during Fulham's best spell of the game - or rather at the end of it.

Three of their five first-half shots came in the five minutes before the USA wing-back's mistimed tackle on Azpilicueta. Some disputed whether the red card was merited, but in the modern era it was dangerous enough to justify a sending off.

It was a disastrous three minutes for Fulham because Ivan Cavaleiro had just missed their best chance of the game when, unmarked on the penalty spot, he fired over from Kenny Tete's pass.

They ended up defending for most of the second half - with only 23.2% of the ball - although they did have chances. Harrison Reed and Aboubakar Kamara forced saves and Cavaleiro had a shot blocked by Thiago Silva.

Just when it looked like they were going to make it six Premier League draws in a row, Areola failed to deal sufficiently with Chilwell's cross and Mount pounced.

Match stats - Chelsea are the 1-0 kings

Chelsea's win ended a run of three straight Premier League defeats on the road. This was the Blues' fourth away clean sheet of the season, after keeping just one last term.Fulham remain winless in their last 19 Premier League London derby matches (D2 L17) since a 2-1 win over West Ham in January 2014.Chelsea have lost just one of their 29 Premier League meetings with Fulham (W18 D10), remaining unbeaten in their last 19 against the Cottagers in the competition.Chelsea have won 131 Premier League games by a 1-0 scoreline, the most common winning score for a single team in the competition's history.Chelsea had 21 shots against Fulham, only managing more against other promoted sides West Brom (22) and Leeds (23) in Premier League games this season.As well as scoring the winner, Mason Mount created seven chances in this game - the joint-most by a Chelsea player in a league game this season (Mount also seven against Leeds).Antonee Robinson's red card was Fulham's third in the Premier League this season - no side has had more so far this term.Antonee Robinson became the eighth different player from the USA to be sent off in the Premier League, with Fulham the first side to have two American players see red (also Carlos Bocanegra).

Chelsea visit Leicester City on Tuesday, while Fulham host Manchester United the next day (both games at 20:15 GMT).

Attempt missed. Timo Werner (Chelsea) right footed shot from the centre of the box misses to the right. Assisted by Christian Pulisic following a fast break.

César Azpilicueta (Chelsea) is shown the yellow card for a bad foul.

Ademola Lookman (Fulham) wins a free kick in the attacking half.

Attempt missed. César Azpilicueta (Chelsea) right footed shot from the centre of the box is too high. Assisted by Timo Werner.

Callum Hudson-Odoi (Chelsea) wins a free kick in the attacking half.

Ademola Lookman (Fulham) is shown the yellow card for a bad foul.

César Azpilicueta (Chelsea) wins a free kick in the defensive half.

Attempt saved. Aboubakar Kamara (Fulham) right footed shot from outside the box is saved in the bottom right corner.

Thiago Silva (Chelsea) is shown the yellow card for a bad foul.

Ademola Lookman (Fulham) wins a free kick in the defensive half.