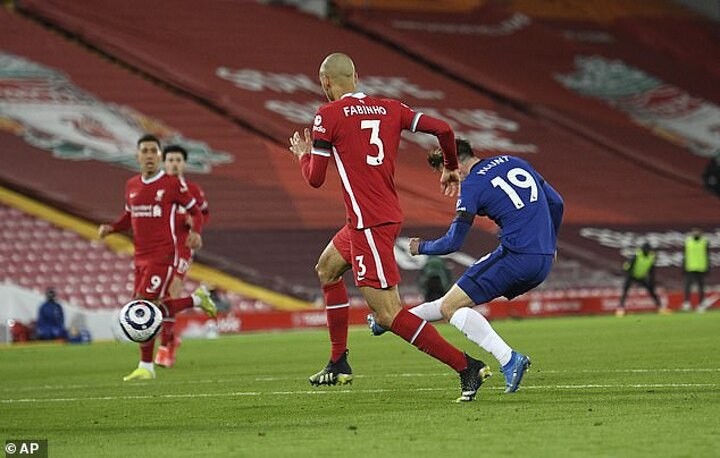 Mason Mount says Chelsea team-mate Kurt Zouma was the inspiration behind his goal celebration against Liverpool.

The England star scored brilliantly when he cut inside to fire a low shot past Liverpool keeper Alisson, as Chelsea took a valuable three points in the hunt for the Champions League places.

Chelsea's first league win at Anfield since 2014, moved them up to fourth in the standings and are unbeaten in ten games since Thomas Tuchel replaced Frank Lampard.

After scoring past Liverpool, he joined Chelsea team-mate Ben Chilwell for a choreographed celebration.

Mount explained that their celebration was inspired by Zouma's love for anime cartoons.

The 22-year-old told the club's official website: 'Me and Chilly always sit together behind Zouma on the plane when we travel away for the Champions League and stuff.

'He's always watching cartoons like anime so we usually watch from behind and laugh at him.

'We said if one of us scored, we'd do it so that was the reason behind it and obviously it's one for Kurt as well.'

The victory gives Chelsea a four-point gap on Liverpool, though Everton and West Ham are directly behind the Blues and both with a game in hand.

Chelsea are in great form in the league though, having not lost since their 2-0 defeat against Leicester on January 17.

Mount said: ‘We’re not content to be in and around the top four – we want to secure our place in those positions and to be right up there.

‘We need to keep working. We’re on a good run but we need to go into every game confident and hopefully that will help us secure a good position.’