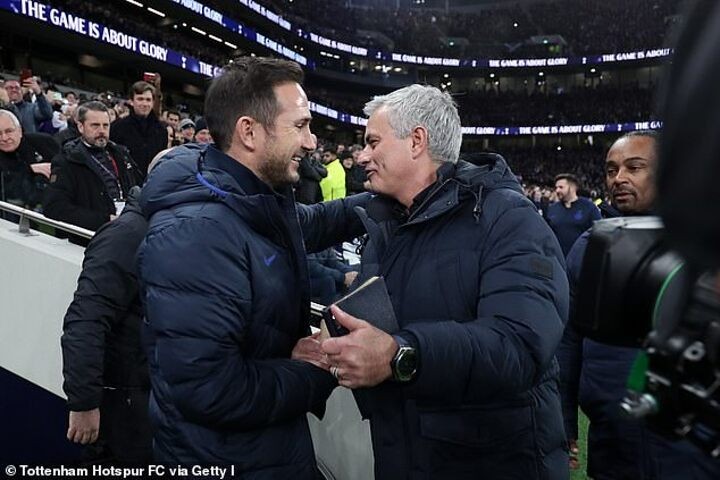 Tottenham boss Jose Mourinho is 'sad' to have seen Frank Lampard lose his job as Chelsea manager after just more than 18 months in the role.

The Blues legend was dismissed on Monday morning following the club's torrid run of five losses in eight league games, becoming the 10th manager to be sacked during the Roman Abramovich era.

Former Paris Saint-Germain and Borussia Dortmund manager Thomas Tuchel is set to replace Lampard at the club currently sat ninth in the Premier League table, and is flying into London at some stage on Tuesday.

But speaking after Spurs' 4-1 victory at Wycombe in the FA Cup fourth round on Monday night, former Chelsea boss Mourinho - who himself was fired twice by the Russian owner in 2007 and 2015 - said he felt sorry for Lampard but claimed it is symptomatic of the brutality of the modern game.

Asked if he would be calling his former midfielder to check up on him, Mourinho replied: 'I don't think in this moment that Frank wants to speak with me or anybody apart from his close circle of let's say family and big friends.

'But of course I am always sad when a colleague loses his job, and of course Frank is not just a colleague, he's an important person in my career, so of course I feel sorry he did.

'But it is the brutality of football, especially the brutality of modern football. So when you become a manager, it is something that you have to know that sooner or later it is going to happen to you.'

Manchester City manager Pep Guardiola also hinted at the game's ruthlessness and claimed that managers do not have time to implement their own ideas anymore and offered to go for dinner with Lampard when the current coronavirus lockdown comes to an end.

'People talk about projects and ideas. They don't exist. You have to win or you will be replaced.

'I respect the decision by Chelsea, but I hope to see Frank soon and go to a restaurant with him when lockdown is finished.'

Leicester City manager Brendan Rodgers, who was in the opposition dugout for Lampard's last league game as Chelsea manager, claimed the former England star deserved more time at Stamford Bridge due to the nature of his squad.

Lampard helped bring through youngsters such as Mason Mount and Reece James, but £89million summer signing Kai Havertz and £52m compatriot Timo Werner did not settle at Stamford Bridge during his tenure.

'I am really sad for him and his staff. I know how much the club means to him and all he's given them,' Rodgers said.

'Looking at the squad, looking at everything else around it and how young they are, the adaption for players coming in, it's a team and a squad that needs time. Unfortunately he hasn't been given that time.

'I really feel for him. He had the courage to step out of an amazing career as a player and could have taken an easier route and went straight into coaching and managing.

'He took a job he couldn't really turn down, even though he had not a lot of experience. He thought he could do a great job there and I thought he did do that last season.

'Ok, results wouldn't have been what they wanted (this season) but it's not what he wanted because he's a winner himself. But like I said, I feel it is a job that needed time and sadly for him he doesn't have that time.'