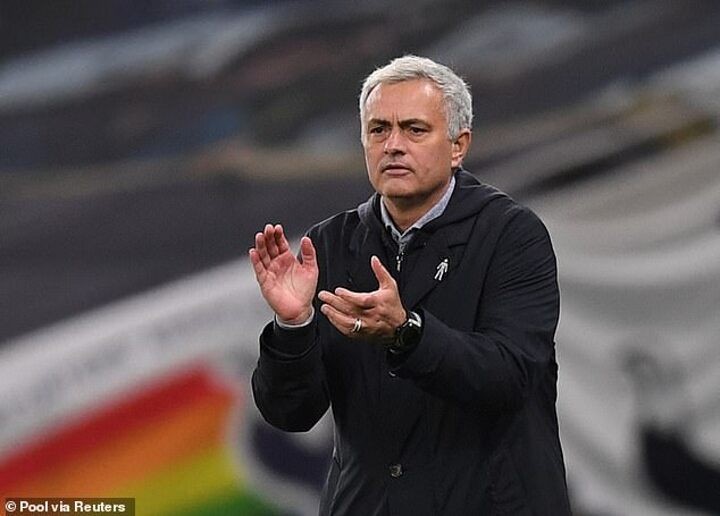 Jose Mourinho was hailed for a 'masterclass' as his Tottenham Hotspur side saw off his old rival Pep Guardiola and Manchester City to burnish their title credentials.

Spurs moved to the top of the Premier League table - at least until Leicester City head to Liverpool on Sunday evening - as pundits purred over a 'classic Mourinho performance.'

Though they only saw 34 per cent of the ball, Mourinho's side defended resolutely and were able to punish City on the count-attack, with Son Heung-min and Giovani Lo Celso scoring their only two shots on target.

And Mourinho was made to appear a tactical genius when Lo Celso scored just 35 seconds after being brought on as a substitute.

It was the perfect way for Mourinho to mark his first anniversary as Tottenham boss and he took plenty of plaudits afterwards.

'Spurs have had some great teams over the years, seen great footballers, beautiful footballers, but they've not won a thing,' Jamie Redknapp said on Sky Sports.

'If Spurs fans have to take watching that style to win trophies, they will take that.

'Mauricio Pochettino built a lovely team - what did they win? Zero.

'I wasn't sure Jose Mourinho could do it at Spurs but he makes players work so hard. It's unbelievable how hard Harry Kane and Son Heung-min work without the ball.

'Spurs did so well without the ball - it was a masterclass from Jose and the team.'

It was a fourth consecutive win for Spurs since they blew a three-goal lead to draw 3-3 with West Ham on October 18.

Since then, they have beaten Burnley, Brighton and West Bromwich Albion all by a single goal as they showed those classic Mourinho characteristics of grinding out victories.

The visit of City was always seen as the true litmus test of how far Spurs have progressed under Mourinho and they rose to the challenge.

Gary Neville, also speaking on Sky Sports, stopped short of tipping Tottenham for the title but was nonetheless impressed with their performance.

'I doubted it a few weeks ago [they could win the title] and I'm not going to change from that,' Neville said.

'But they are certainly gaining in confidence and this was a really good performance.

'In the first half, it was resilient and the Mourinho of old. In the second half, they were just better than City.'

Kane didn't find the net on this occasion but played an important role in both his team's goals, reflecting his all-round attacker's game.

He dropped off to draw the City centre-halves out of position, allowing Son to gain the space needed to slot home Spurs' early opener.

'Kane is messing with them, he has been spectacular,' Neville said during commentary. 'Kane has got both centre-backs where he wants them. He's playing with them.'

The England striker than turned and laid on the pass that sprung Lo Celso free to score their second.

'A wonderful touch and turn from Kane. This is a classic Jose Mourinho performance. Brilliant for Spurs, a nightmare for City,' added Neville.

City also lost at the Tottenham Hotspur Stadium by the same scoreline back in February and they had 41 shots at goal across the two defeats without scoring.

But having passed one test of Tottenham's title credentials here, Mourinho now faces another, with a visit to his former club Chelsea lying in wait on Saturday before a north London derby with Arsenal on December 5.