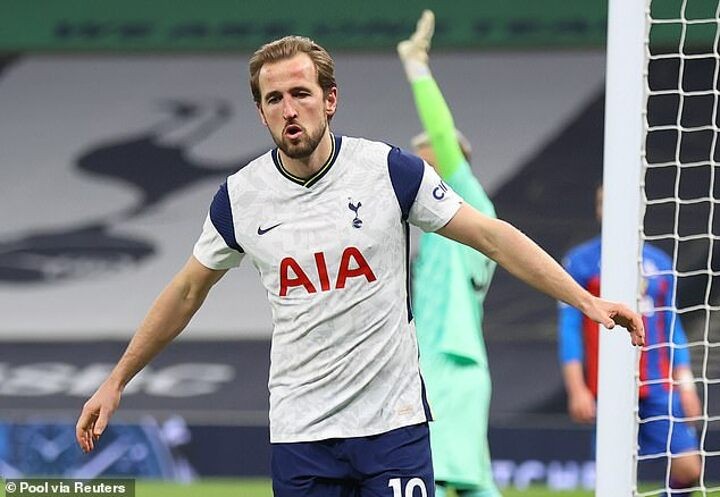 Jose Mourinho hailed the overall quality of Tottenham's attack after they put Crystal Palace to the sword with a 4-1 win to move up to sixth in the Premier League table.

Gareth Bale and Harry Kane hit doubles to cancel out Christian Benteke's equaliser late in the first half and make it five wins in a row for Spurs in all competitions.

A run of three consecutive victories in the top flight have ignited the Lilywhites' top four hopes and they have scored nine goals during that period.

Mourinho said: 'We have very good attacking players and they allow me to do what I did today which was Dele Alli, who played really well against Fulham, to leave him out for Lucas (Moura) this time.

'Sonny, Gareth, Kane and then (Erik) Lamela comes and comes well and (Steven) Bergwijn didn't even come. Tanguy (Ndombele) stayed on the bench.

'We are a team with a lot of talent in this area, but this Gareth is an extra for us and a plus.

'This Gareth didn't start the season, this Gareth is playing this way for a couple of months and of course the quality is amazing. He is a fantastic player.'

Kane's second in the 76th minute was assisted by Son Heung-min and it was the 14th goal combination by the pair in the Premier League this season.

It beat the previous record of 13 set by Alan Shearer and Chris Sutton for Blackburn in the 1994-95 campaign.

On Kane, who grabbed his 24th goal of the season, Mourinho added: 'He is there with the best. I wouldn't change him for anyone in this club because he means so much for us and he is a fantastic player.'

Tottenham are up to sixth and two points off fourth-placed Chelsea in the race for the top four with the Blues, West Ham and Everton in action on Monday.

'We just have to try to get the best number of points that we can and try to win the more matches we can. If possible playing well, if possible scoring goals and if possible not conceding many and try to see what can happen.

'I don't forget the Europa League, I refuse to forget or just to say Thursday is not important because for me it is important. The cup final is there waiting for us but still a couple of months.

'We just have to work hard, to stick together, to go through the difficult moments like we did already and try to enjoy the good moments but enjoy in a soft way because we know how different it is going to be for us next.

'For us next in the Premier League it is Arsenal away, Aston Villa away and Newcastle away so this is what is waiting for us around the corner and try to be happy when we can.

'Today we can after three victories in the same week and if the stats I was given are correct, 100 goals scored in the season (in all competitions), which, for a very defensive team, a very negative team, is not bad.'

'I think Harry has improved enormously over the years, but that is not surprising,' he said.

'You must remember in 2016, which is five years ago, a lot of these guys were already stars, him and Dele Alli.

'And Harry has added further strings to his bow because he is capable of playing in this retreating centre-forward position where when he gets there and gets on the ball, he is capable of producing very good passes.

'The thing that killed us off tonight I suppose was the fantastic strike for the third goal.'