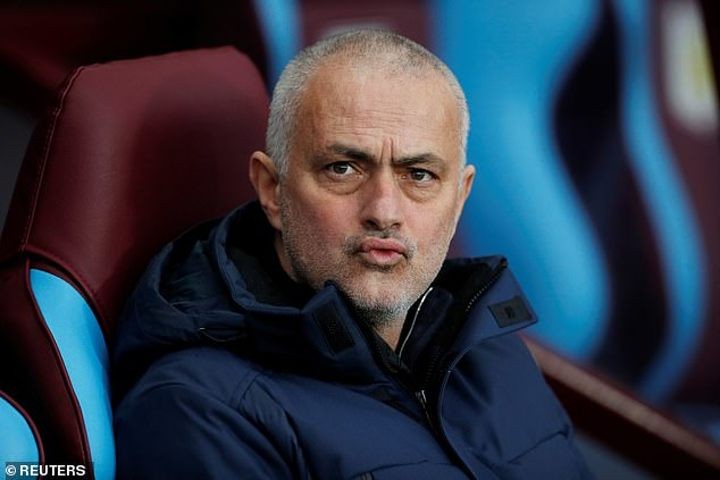 Jose Mourinho could not resist a mischievous quip about Manchester City's financial irregularities after Tottenham climbed back into the top five of the Premier League.

Son Heung-min scored a stoppage-time winner at Aston Villa and the Spurs boss was asked if fifth might be good enough to qualify for the Champions League as City faced the prospect of a two-year ban from the competition.

'I didn't lose one single minute analysing what UEFA have to analyse,' replied Mourinho. 'If I go into that, I have to ask if the team that finished second in 2018 is going to be champions, yes or no?'

His Manchester United team were runners-up, 19 points behind City in 2018, and the Spurs boss added: 'That would be interesting but joking apart, I just wait calmly.

'Fourth or fifth, I just think about doing the best we can. The more points we can get the better position we can get. At the end of the season we'll see where we are. If we are sixth or seventh then it doesn't matter if the fifth goes to Champions League.'

Manchester City have pledged to appeal against UEFA's decision to hit them with a fine and a ban from the Champions League for failing to comply with Financial Fair Play rules.

'I don't think it is about huge decisions or small decisions,' said Mourinho. 'The rule, the law, it is or it isn't. UEFA punish them but they have the chance to appeal.

'Until the appeal finishes, Manchester City have the benefit of the doubt. In the end of the process we will see if they are punished or not.'

Tottenham are within a point of Chelsea in fourth and go to Stamford Bridge on Saturday.

'There is a big fight,' said Mourinho. 'This is the Premier League. So when we speak about the fifth spot, for sure Wolves, Sheffield United, Man United, Arsenal, Everton, everyone looks to the table and week after week they say we can do it and they can. It's going to be very hard.'