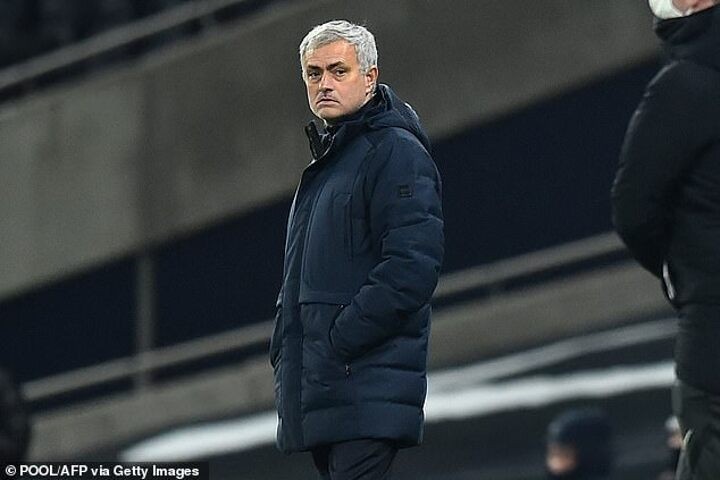 Tottenham and the FA Cup, once the best of friends, have become perfect strangers.

They have won the trophy eight times, six across the 30 years after their historic Double in 1961.

Three times in the 1960s, twice in the 1980s and most recently in 1991, when Paul Gascoigne self-destructed and the outcome was decided by an own goal from Des Walker.

Then, nothing. Not even a single appearance in the FA Cup final for a full three decades. Not even when the year ended in a one.

Spurs are the only club from the current Big Six not to have won it in this time.

They have made it to the last four but then so did Wycombe Wanderers with Roy Essandoh, the striker discovered through an advert on Teletext, playing up front in 2001.

All of which leads to Jose Mourinho, the manager appointed to end the wait and still plotting away on four fronts.

Already in the Carabao Cup final, where Manchester City await in April, still in the Europa League and fifth in the Premier League, seven points from the top of the table.

Mourinho promised to take a full squad to Adams Park although his selection will nod towards Liverpool’s visit in the league on Thursday.

‘I don’t look at Wycombe as a team that is going to kill the giant,’ the Spurs boss said.

‘The Championship is one of the best leagues in the world. Better than the top leagues in many countries. With all respect to Marine, this is a different level.’

Wycombe are struggling at the bottom of the Championship with only three wins from 23 games but their success under manager Gareth Ainsworth has been built upon a fearless spirit.

Four years ago, when still in League Two, they led 3-2 at Spurs with 89 minutes played only to lose to late goals by Dele Alli and Son Heung-min. They compete in the manner of Ainsworth, unashamedly his own man, bringing his rock-star chic to the touchline with long hair, leather jackets, open-necked shirt and snakeskin shoes.

‘He must be a guy who enjoys life,’ said Mourinho. ‘He looks a happy guy and if to be happy, part of his life is to play the rock, to sing, to be part of the beautiful world that is music, he has to do it.

'I remember somebody was saying — or maybe he was saying it himself — that with a different haircut he would be seen as a great coach by others but I don’t think it has anything to do with the haircut.

‘Pep Guardiola has no haircut. My haircut is always the same, old-fashioned, white-hair haircut. He has this long, rock-star hair, amazing. And he is a good coach. You only stay in the club for so long if you are good — you are promoted, you stay and fight in a difficult competition like the Championship. He knows what he wants. He knows clearly the way he wants to play and how to get the very best out of his players.

‘So he is a good coach. And a happy guy. I only feel sorry I cannot sing with him because I will destroy his music.’

Mourinho was on the way to the Premier League title in 2015 when his Chelsea side were stunned by Bradford, then in League One, at Stamford Bridge.

It was an upset that no one saw coming and, having swept past eighth-tier Marine in the third round, he will not allow for any complacency at Adams Park as he eyes a spot in the last 16.

‘I had lots of experience in the FA Cup,’ said Mourinho, who has won the trophy once, with Chelsea in 2007, the first final back at Wembley after the stadium was rebuilt.

‘Marine was an extreme situation but I played against League Two and League One,’ he added. ‘I won and I lost. I lost in a season when I was a champion with Chelsea.

‘We lost in the FA Cup at home against League One opponents.

‘What we did against Marine is not enough to win against Wycombe.

‘They are fully professional like we are, talented and they have ambitions.

‘They want to compete. We need more than we gave against Marine.

‘With all the professionalism the boys gave there, we need more. It is going to be more difficult.’