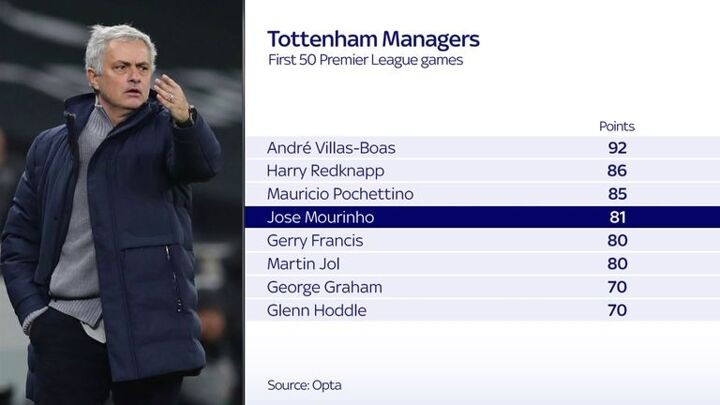 Jose Mourinho admits he is not the manager he once was, but believes maturity is helping him deal with Tottenham’s "negative moments".

Reflecting on the club's poor run of form, which has seen them lose five of their last six in the league, Mourinho says he is far calmer and less emotional than in previous jobs, referencing one of his two dramatic departures from Chelsea.

Sunday's defeat at West Ham means Mourinho has managed to secure just 81 points from 50 league games in charge of Tottenham - his lowest total at this stage of any of his managerial stints.

Asked if he was better equipped now to cope with such a setback, Mourinho said: "Thank god I'm not the manager I was. Probably, I wouldn't be as calm, confident and in control of my emotions.

"Sometimes during my career I had problems not in relation to results. As you know, I didn't have many bad runs.

"Day-by-day problems happened many times and I reacted previously in a much more emotional way.

"As an example, I left Chelsea as a champion.

"Maybe age and experience makes you realise that we are better equipped to cope with negative moments.

"I am calm, I am in control of my emotions. My nature doesn't change. If I lose a game, of course I am not happy, but maturity helps.

"I feel very confident and I believe we are going to improve and I will be in Tottenham history for the good reasons and not the bad reasons."

After last weekend's defeat to West Ham, Mourinho delivered a bullish defence of his coaching methods, describing them as "second to nobody in the world."

Speaking ahead of Wednesday's Europa League round of 32 second leg against Wolfsberger, the 58-year-old was keen to compare himself against other managers once more.

Asked again about the current poor run, Mourinho said: "It's a positive thing that you say I'm not used to it, but I want to know: Which coach, at the end of his career, can say that everything was blue sky and never a little bit grey, cloudy or even dark?

"Unless it's a coach that was always in dominant clubs where that club is the top club in a country, then it is more difficult to have difficult moments.

"The fact that I'm giving them hard work but not the results is something that hurts me.

"I believe that I can give it. I gave it everywhere I've been and I want to do it. I'm more motivated than ever.

"I feel positive. I am not unhappy. I wake up in the morning and I want to come back to work."