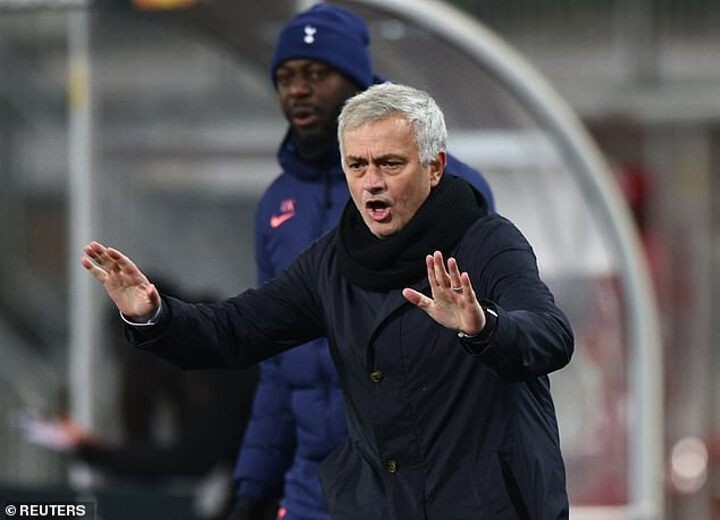 Jose Mourinho insists Tottenham have bigger targets this season than simply emerging on top in a local skirmish against Arsenal.

His Spurs team are fighting for points to keep them at the Premier League summit and not simply earn North London bragging rights for supporters.

'It means more when we are not in the position we are now because now we are in such a good position,' said Mourinho, on the matter of the historic rivalry ahead of Sunday's derby.

'It happened last season when we played Arsenal in the last part of the season. It was about winning against Arsenal to give something good, to have a good feeling.

'In this moment, we also look to the table and we are in a good position, fighting for positions in the top part of the table, but we never forget the fact that there are historical rivalries and what it means for the fans.

'When you arrive at the club you understand the culture, you learn the culture and you share the values with the fans.'

Spurs came from behind to beat Arsenal in July. It was Mourinho's first North London derby and helped his team finished above their neighbours in the Premier League for the fourth year in a row.

It also maintained his own excellent personal record against Arsenal. He has never lost a home game against them and victory at White Hart Lane on Sunday will keep his team at the top of the Premier League and leave the neighbours 11 points adrift.

Harry Kane, with 10 goals in 11 North London derbies, and Sergio Reguilon are expected to be fit after missing Thursday's draw against LASK in Austria, when Mourinho criticised the attitude and motivation of some of his players.

'We knew that a derby is nothing to do with form,' he added. 'It's always a good moment to play Arsenal and always a bad moment. Good because it motivates. Bad because they're a good team and in these matches the table doesn't say anything.

'The number of players they use in the defensive process, the way they go fast counter-attacks and fast transitions.'

He is also wary of Willian, who he worked with at Chelsea, and wanted at Tottenham when he left Stamford Bridge in the summer, but could not compete with Arsenal's offer of a three-year contract at £250,000 a week.

'We don't have money for Willian,' said Mourinho. We cannot pay the wages that he gets at Arsenal so I didn't want to waste our time because we cannot pay these wages.

'He is still dangerous. He is still one of the best players in the Premier League. Apart from that, he is a good friend. I have nothing to hide in relation to that.

'We keep in touch, we keep in contact, we call each other. We wish good things to each other. He is my friend and of course he is a very good player.'