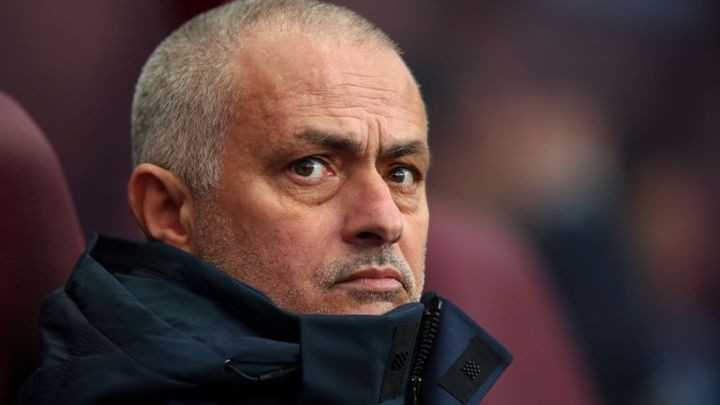 The Premier League champions were banned from all UEFA competitions by European football's governing body on Friday for "serious breaches" to Financial Fair Play regulations.

If City, who signalled their intent to appeal the verdict to Court of Arbitration for Sport (CAS), finish in the top four and their ban is upheld, it would mean a Champions League place would go to the team who finish fifth in the Premier League.

Asked for his assessment of the UEFA ban on City, Mourinho joked he would be interested to see if it had a repercussion on Pep Guardiola's title-winning Premier League campaign in 2017/18, when his former side United finished second.

"My views are that I didn't lose one single minute analysing what UEFA and FIFA have to analyse," Mourinho said in his post-match press conference after Spurs' 3-2 win against Aston Villa on Sunday.

"If I go into that analysis I have to ask if the team that finished second in 2018 is going to be champions?!

"That would be interesting. But jokes apart I just wait calmly. I don't think about fourth [position] or fifth. I just think about doing the best we can, [win] the most points we can, [finish] the best position we can.

"At the end of the season, we will see where we are because maybe we are sixth or seventh and then it doesn't matter if fifth goes to Champions League."

Mourinho stressed the need to reserve final judgement on City's punishment until their appeal is concluded.

"I don't think this is about huge decisions or small decisions," he said.

"It is about the rules, the law - it is or it isn't. From what I got, UEFA punished them but they have the chance to appeal.

"I think until the appeal finishes Manchester City has the benefit of doubt. At the end of the process, we will see if they are punished or not. I have nothing more to say about that."

Mourinho: CL qualification will be 'very hard' for Spurs

Heung-Min Son scored a stoppage-time winner for Spurs at Villa to lift Mourinho's side into fifth and within a point of Chelsea, who play Manchester United on Monday, live on Sky Sports.

The Portuguese head coach believes there a host of clubs in contention for the Champions League spots, with Sheffield United one point behind Spurs, while Wolves, Everton and United are all within five points of fifth.

"We have a big fight, you could see yesterday Liverpool in first against last.

"You could see today Villa fighting to stay in the division and us fighting for a top position how difficult it was.

"This is the Premier League so when we speak about fifth [place] I think [the battle for] fifth, Wolves, Sheffield United, Manchester United, Arsenal and Everton, everybody looks to the table and week after week they say, 'we can do it'.