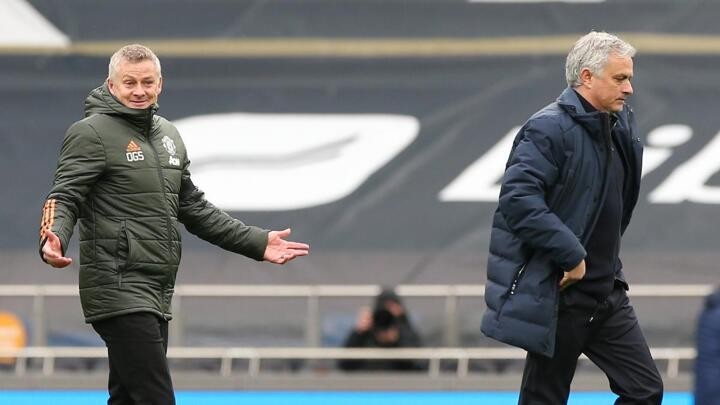 United manager Solskjaer expressed his displeasure at Son going to ground in the first half of Sunday's Premier League match between the teams, after Scott McTominay flicked an arm the South Korean's way.

It was a tame midfield incident that led to an Edinson Cavani goal for United being disallowed following a VAR review, and despite Solskjaer seeing his team come from a goal down to win 3-1 at Tottenham Hotspur Stadium, the Norwegian gave a withering verdict of Son's reaction.

Solskjaer pithily told Sky Sports: "I have to say, if my son stays down like this for three minutes and he gets 10 of his mates around him… if he gets that in the face from one of his other mates and he needs 10 mates to help him up, he won't get any food."

Mourinho, who was unhappy and "very, very surprised" that journalists did not ask him about those remarks in a post-match news conference, took it on himself to raise the matter.

The former United boss then delivered a moment of press conference theatre, stridently taking on the man who succeeded him in the Old Trafford hot-seat and even going so far as to intimate Solskjaer's remarks spoke poorly of him as a parent.

"I told Ole already this, because I met him just a few minutes ago," Mourinho said. "If it's me, telling that player A, B, or C from another club, 'If it was my son I wouldn't give him dinner tonight', or something like that, what would be the reaction?"

The former Chelsea, Inter and Real Madrid boss, whose team blew a half-time lead to lose 3-1 and see their Champions League hopes majorly dented, continued on his theme.

Mourinho said: "In relation to that, I just want to say, Sonny is very lucky that his father is a better person than Ole, because I think a father - I am a father - you have always to feed your kids, it doesn't matter what they do.

"If you have to steal to feed your kids, you steal. I am very, very disappointed, and like we say in Portugal bread is bread and cheese is cheese, I told Ole already what I think about his comments."

Before Mourinho's outburst, Solskjaer had said in his own news conference that the rival bosses remained on good terms.

Solskjaer said: "Sometimes some words are being said. But the most important thing is we're colleagues and friends. Before, during or after a game, you can have a bit of a dispute.

"I think we've got the utmost respect for each other, and I think that's the point here. Sometimes it's some words being said. I had a couple words I could take back at that time."

The remarks from Mourinho came on a day when his team proved weak front-runners once again.

Spurs have dropped 18 points from winning positions in the Premier League this season, second only to Brighton (20).

That is the most points any Mourinho side have dropped from winning positions in a Premier League campaign.

He is also mired in a period of being unable to get the better of his former teams. Mourinho is winless in his last five home matches in all competitions against sides he has previously managed (D2 L3), having won 12 such matches in a row between 2002 and 2018.

Moreover, Mourinho has lost 10 league games in a season for the first time in his managerial career.

While Solskjaer's United sit second, and headed home to Manchester happy with another three points, Mourinho, to borrow a theme, had plenty to chew over.