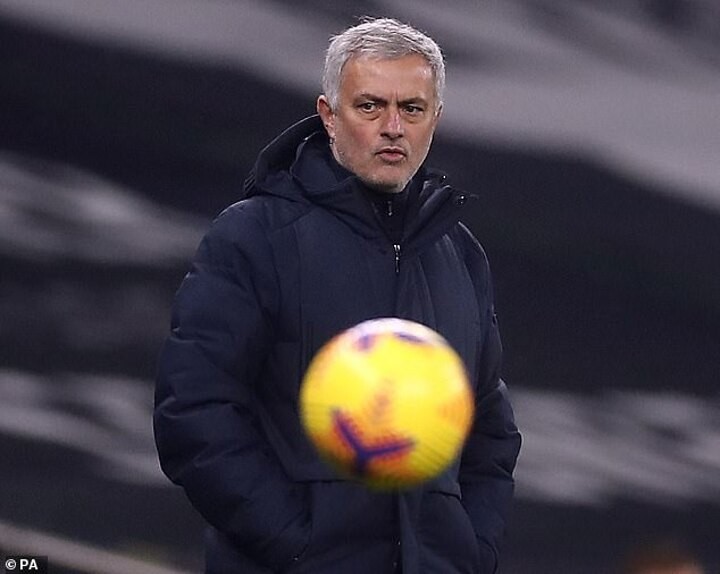 Tottenham boss Jose Mourinho says the solution to his side dropping points late on in games is simple - score more and cut out the defensive mistakes.

Wednesday's 1-1 draw against Fulham was a miserable retelling of the same story for Spurs as they let a 1-0 lead slip in the final 15 minutes for the fourth time this season.

In total, Mourinho's side have dropped 10 points from winning positions this campaign, which is undermining any credible attempt to challenge for the Premier League title.

It has been their failure to put games to bed that has left them vulnerable at the back end of games and Mourinho knows it has to change.

'We need to score the goals we can and not make mistakes that punish us,' he said ahead of Sunday's trip to Sheffield United.

'If you compare Hugo's (Lloris) performance with (Alphonse) Areola's performance on Wednesday, you have an answer.

'Areola made I believe a couple of impossible saves that would kill the match, also the post, then a defensive mistake and a goal.

'That's it. It looks complicated but it's simple, a basic analysis of the game.

'Apart from that we can discuss many, many things, of course I don't want, I'm the first one to dig deep to try to understand what my team can improve and has to improve.

'I am the first one to do it. Going to the basics, you score goals, kill matches, you don't score goals, you stay in the limit.

Spurs travel to Bramall Lane to take on a Blades side who won their first game of the season in midweek.

Chris Wilder's men are still in danger of being the worst ever Premier League side, but Mourinho insists their results are not showing the true picture.

'I don't look to the table. Of course, I look but I go deeper than that,' he said. 'They're not the worst team in the Premier League at all.

'They're a much, much, much better team than what the table says, you analyse their matches and many times the opponent was not better than them.

'Many times they lose 1-0, they draw 1-1, they are a very good team. If in our mind we're going to play the worst team in the Premier League we're going to be in big trouble.'