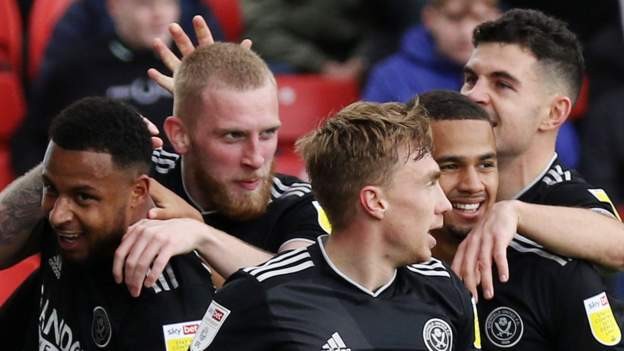 Following a dreary opening half, the Frenchman broke the deadlock by curling a right-footed shot beyond Brad Collins and then doubled the lead by converting Ben Osborn's low cross.

Jasper Moon hit the post for the Tykes, without a win in their 11 previous games, before Osborn seemingly put the match out of their reach by adding United's third.

Substitute Devante Cole scored Barnsley's first second-half goal since the opening day of the season and Aaron Leya Iseka pulled another back with eight minutes remaining, but they could not find an equaliser and head coach Markus Schopp's position looks precarious with his team next to bottom of the table.

Both sides made four changes, with Oli McBurnie starting up front for the Blades - having scored against them in Barnsley's 3-2 home win in April 2018, the most recent meeting between the south Yorkshire clubs.

However, there was little quality shown by either side in the opening 45 minutes which saw just one effort on target each and neither keeper seriously tested.

Cauley Woodrow forced a low save from United goalkeeper Robin Olsen soon after the re-start, but the home side were stunned by Mousset's quickfire double.

He was replaced just after the hour mark as Slavisa Jokanovic sent on Billy Sharp and David McGoldrick as substitutes, with 194 Championship goals between them.

Sharp headed too high with his first opportunity, but Osborn found the bottom corner to extend the lead, leaving Barnsley with no option but to throw caution to the wind.

Cole - whose previous goal for Barnsley came during a 2014 loan spell - volleyed home after missing an easier chance when the score was 2-0 and Leya Iseka grabbed his first goal in English football with a left-footed shot after powering between two defenders.

It was, though, not quite enough for the Tykes and they are only above Wayne Rooney's Derby, who had 12 points deducted in September for going into administration.

Attempt missed. Jasper Moon (Barnsley) header from the centre of the box misses to the left. Assisted by Cauley Woodrow with a cross following a corner.

Callum Brittain (Barnsley) wins a free kick in the attacking half.

Toby Sibbick (Barnsley) wins a free kick in the defensive half.

Claudio Gomes (Barnsley) wins a free kick in the defensive half.

Claudio Gomes (Barnsley) wins a free kick in the attacking half.