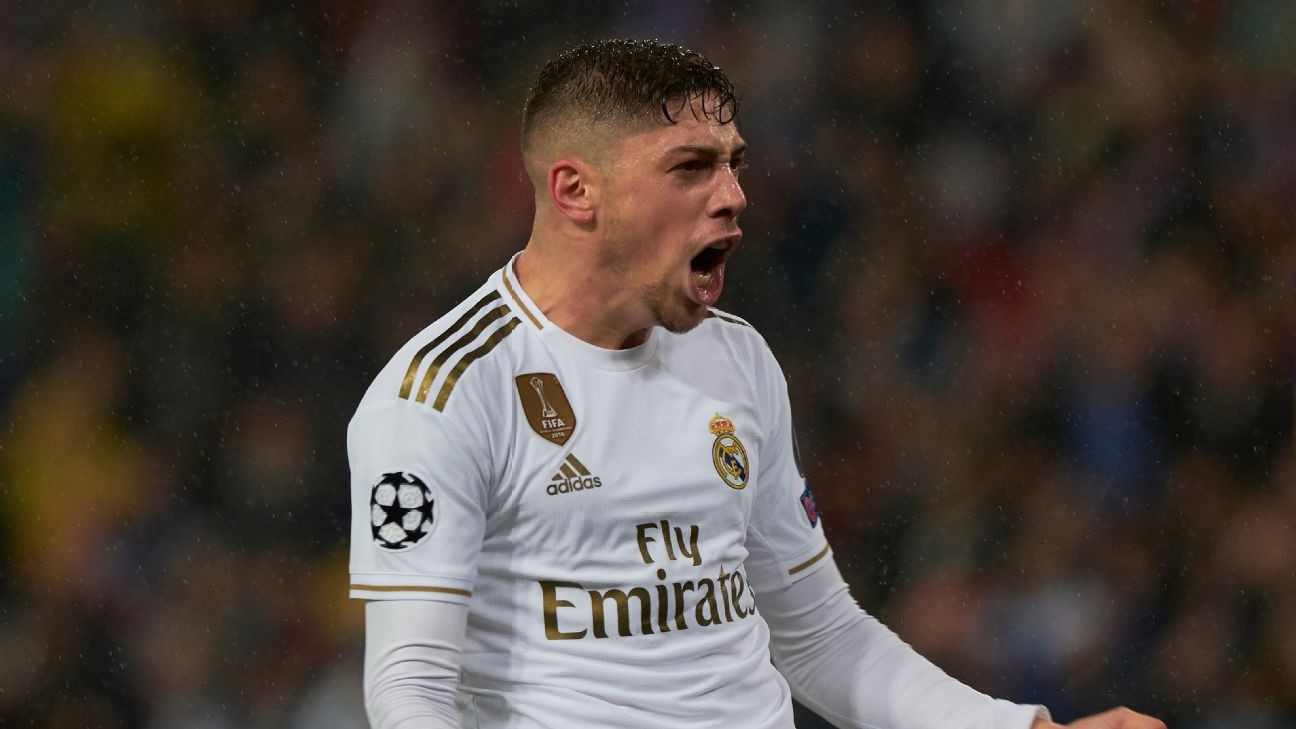 Real Madrid and Barcelona were united by their teenage prodigies last weekend.

Los Blancos via their brilliant 19-year-old Brazilian, Vinicius Junior, who drew three spellbound Atletico Madrid opponents toward him before releasing a magical pass so that Ferland Mendy could feed Karim Benzema for the winning goal. Barca, Spain's reigning (but soon to be deposed) champions, offered prayers of thanks to 17-year-old Ansu Fati, whose rampant precocity continues to set new Camp Nou, La Liga and Champions League records. His brace of goals won three precious points against a Levante side that should have drawn, and could have won, at Camp Nou for the first time in their history.

Nevertheless, Spain's dominant clubs are utterly divided on this subject. They are on two sides of an argument about what it is to have young talent, whether such precious resources are for sale, how to bring promising prodigies to maturity and whether the helter-skelter drive towards trophies and increased turnover allows time to develop.

Put it like this: In a week when Barcelona, not long ago the kings of youth development, elbowed five fledgling players out the door, without much intention of recuperating them, Real Madrid stayed three points clear at the top of La Liga using a clutch of players they've successfully nurtured in a manner to which those in charge at Barcelona seem to be blind.

Starting for Madrid against their bitter red-and-white rivals were Casemiro, Dani Carvajal and Federico Valverde -- each of whom were made to serve apprenticeships far from either the majestic Bernabeu or the sprawling Valdebebas training ground you see off to your right as you drive in from Barajas airport. Casemiro was sent to Porto (where, at age 21, he played 40 times and reached the Champions League quarterfinal under Julen Lopetegui), Carvajal to Bayer Leverkusen (36 matches and Champions League qualification), while Valverde spent 2017-18 at Deportivo La Coruna (latterly coached by four-time Champions League winner Clarence Seedorf, where he, and the Galicians, were relegated).

Throw in the fact that Lucas Vazquez and Marco Asensio spent 2014-15 and 2015-16 respectively at Espanyol (nearly 80 appearances between them), with the former reaching the Copa del Rey semifinal, and Madrid's policy becomes crystal clear.

Between them, Casemiro, Carvajal, Lucas and Asensio have 13 Champions League winners' medals, two Champions League final goals, one final assist and a converted penalty in the 2016 final shootout. Whether or not you draw a direct line linking the experiences those guys gained in Westphalia, Catalunya, Oporto or Galicia and this deluge of success in the tournament that Madrid covet the most, Casemiro, Carvajal, Lucas, Asensio and Valverde represent resources that were spotted young, nourished and have gone on to extremely high yields. Valverde, still only 21, is only establishing himself in Los Blancos' first team, but he'd probably be the fourth or fifth name Zidane chooses for his team sheet in important matches -- plus he's the absolute darling of the Santiago Bernabeu.

Obviously, unless you've been on Jupiter or Mars, you'll be starkly aware that this is a dramatic pendulum swing from not many seasons ago when Barcelona (who take on Athletic Bilbao on Thursday in the Copa del Rey quarterfinals; 2:55 p.m. ET, stream live on ESPN+) not only swaggered to the bravado of a bevvy of home-bred talents, they even fielded a team of 11 academy players against Levante in 2012. Of that lineup, once Dani Alves was replaced by Martin Montoya, eight were World Cup winners, European champions (or both) or Olympic Gold medalists. To list all their combined club and international trophies would take the rest of the column, so let's just accept that those virtuoso prodigies -- Xavi, Andres Iniesta, Lionel Messi, Carles Puyol, et al -- were one of the greatest crops ever produced by any club ever.

Which is why that turgid, sloppy and eventually narrow win over Levante, little more than seven years later, brings this subject into stark focus.

After his period away on loan, Federico Valverde has become one of the jewels of Real Madrid's midfield.

During those interim years Madrid (who host Real Sociedad in the Copa del Rey quarterfinals on Thursday; 12:55 p.m. ET, stream live on ESPN+), as detailed, have found ways to sign, mature and integrate players from their youth system. But the days leading up to Ansu's record-breaking Sunday (now he's not only the youngest ever Champions League scorer, he's the most youthful in La Liga history to score two goals in one game) saw that mass expulsion of junior talent from the Camp Nou to all corners of European football. Carles Perez (Roma), Carles Alena (Real Betis), Moussa Wague (Nice), Jean-Clair Todibo (Schalke) and Abel Ruiz (Braga) all were loaned out.

One key difference from Casemiro, Valverde, Vazquez, Asensio and Carvajal is that Barcelona punted these budding talents with options for their new clubs to buy them but with no real intention to bring them back to the Catalan capital. That's in contrast to Madrid's philosophy of using loan spells to toughen up and grant invaluable experience to footballers who weren't quite ready but were evidently bankable futures.

Much was made of the fact that Barcelona, a club for which the founding father of their modern philosophy, Johan Cruyff, used to say that age was irrelevant, "only talent mattered," were down to 14 fully fit first-team players by last weekend. Yes, the much-hyped and evidently promising Riqui Puig added a handful of first-team moments on Sunday and Alex Collado (potentially a better prospect than Puig) made the bench, but if you're of the opinion that Barcelona still have a strategy for what to do with talents who've reached the ages of 18-21 but who aren't automatic starters in the first team, or if you believe that Todibo, Perez and Alena couldn't be in Quique Setien's starting XI a dozen times each between now and May, then you are in a tiny minority.

And have you been paying attention? Even a spot check of the crop that Madrid have planted elsewhere, which they'll harvest in the coming two summers, compared to the Blaugrana talent factory comes up firmly on the side of Los Blancos -- very firmly.

Right now, the talent assessors who report back to Zinedine Zidane (and his employer, president Florentino Perez, with whom relations are gently strained over their disagreement about how to restock midfield) have glowing reports from Germany, Mallorca and the Basque Country. Perez's passion project to recruit the world's very best 16- and 17-year-olds looks like being immensely successful (I give you Vinicius, Rodrygo and, potentially, Reinier) but they already have some explosive tyros banging at the door screaming: "Let me come home!"

Martin Odegaard, only just 21, has been one of the stars of La Liga's season at Real Sociedad. Takefusa Kubo (like Vinicius) chose Madrid over Barcelona and looks a startling talent at Mallorca. Achraf Hakimi has amassed nearly 60 matches for Borussia Dortmund, changed positions, found a notable scoring ability and stands to win the German title this season -- he's also just 21. There are others -- too many to list -- but while Madrid might eventually choose to cash in, each of the latter three already look like they have a magnetic draw for Real Madrid to bring back in seasons to come. They possess quality and, now, experience and maturity.

Barcelona? Right now it's hard to say what their ideas are. Who makes such decisions? The coach who's barely in the front door? The president who's got a year and a half of mandate left before he's obliged to depart? Eric Abidal, the director of football who needed a clear-the-air meeting with president Josep Bartomeu at the weekend to clarify whether he or Ramon Planes is truly in charge of football resource planning?

Meanwhile, there are "Why the heck isn't he still playing at the Camp Nou?" players like Marc Cucurella and Adama Traore successfully strutting their stuff at clubs who know how to polish uncut diamonds. Each kid is a product of Barcelona's once-famous La Masia academy, but no place last summer -- or the previous summer -- could be found for Cucurella, who's exploits at Eibar and now Getafe make those look like joke decisions.

Not developing talent is one thing. Developing it but then failing to recognise it right under your nose is another kind of, much more heinous, myopia.

Traore is pulling up trees (perhaps literally) at Wolves and only left Barcelona, having been sure he was staying, because of what he calls "a misunderstanding." Wolves are howling in delight at that Barcelona blunder, I'm sure.

The long and short of it is this: Madrid look destined to take Barcelona's La Liga title from them this season for only the second time in 12 years. As for the hypothetical crown for "Kings of Nurturing and Developing Youth Talent," well, Los Blancos knocked Barca off that throne some considerable time ago.