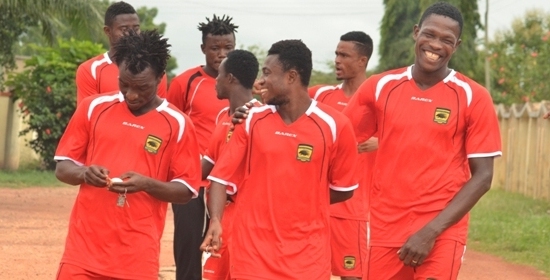 Premier League giants, Accra Hearts of Oak and Kumasi Asante Kotoko, will hope to meet for the fifth time this season when they engage Wa All Stars and Medeama in the semi-finals of the MTN FA Cup, at the Len Clay Stadium at Obuasi today.

The Phobians could stand tall against their opponents, having seen five of their players participate and impress at the just-ended West Africa Football Union (WAFU) Cup, which Ghana hosted and won.

Coach Frank Nuttall of Hearts is expected to count on Patrick Razak, Thomas Abbey, Winful Cobinnah and Kwame Kizito to bring their experience from the WAFU tournament to bear in their bid to triumph over All Stars.

The Wa-based side, on the other hand, knows a win over Hearts will place them in pole position to make history for themselves in the final by winning the trophy for the first time.

In the other semi-final contest of the day, Kotoko will seek to revenge two painful losses to Medeama at the final of the competition in 2013 and 2015.

Medeama have dominated the Porcupine Warriors in the FA Cup and this tie could prove important for the Kumasi-based side to clear their name by beating them.

Players such as Amos Frimpong, Felix Annan, Ahmed Adams, Emmanuel Gyamfi and Yakubu Mohammed will have to brighten their chances of qualification with splendid performances over a well-determined Medeama side.

All participating clubs in the semis haven’t been active since the Premier League was put on hold to allow the just ended WAFU Cup to take place.

But with the interest in the FA Cup keen, fans will be expected to throng the Len Clay Stadium to witness the action-packed semi-final clashes dubbed, “Super Sunday”.